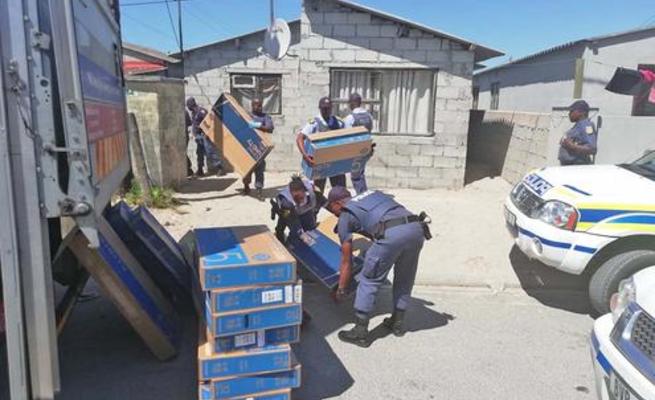 Cape Town – Four fake cops pulled off a major heist in Heideveld on Tuesday, making off with 300 flat screen TVs worth R2 million.

And not just any TVs, but 32-inch Samsung HD TVs.

Cops say the daring thieves used police uniforms and blue lights to get the truck to stop and kidnap six men without even pulling a gun.

They later tied the men up and dropped them in a quiet street in Mfuleni.

Manenberg Police Station commander, Brigadier Enolium Joseph, says at about 9am on Tuesday, the truck was travelling along Duinefontein Road in the direction of the N2 highway when a “dark coloured” Toyota Fortuner pulled up next to it. 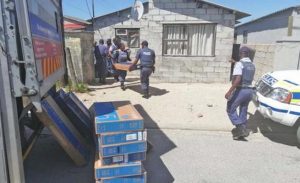 “The fake cops had blue lights and flashed the truck to pull off,” Joseph explains.

“When it stopped, four men wearing what is reported to be SAPS-issued bulletproof vests and a blue police reflector jacket, demanded that they get out of the vehicle. Two of the men put the driver, co-driver and four general workers in the Fortuner while the remaining two took the truck and drove towards the N2.” 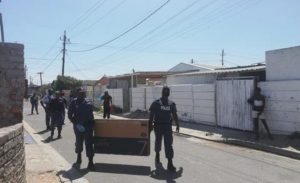 He says the victims did not report seeing any firearms, but believed the men were real police officers and followed instructions.

“They drove up and down Jakes Gerwel Drive for about 45 minutes and eventually took them to a quiet road in Mfuleni where they tied their arms and legs with cable ties, offered them water and left them there,” explains Joseph.

“Passersby saw the men and assisted them and took them to the police station.”

He says the truck had been fitted with a tracker and was traced to Kombela Street in Khayelitsha where cops found it abandoned.

“Officers conducted a search of all the homes in the area where the truck was found and on Wednesday found 49 flat screens. The TVs differ in size and were found stacked up.

“Two men, aged 20 and 40, were arrested. At another property, a 28-year-old man and his 26-year-old girlfriend were also found with TVs and arrested.

“They have been charged with possession of stolen items and officers are still searching for the fake policemen.”

Ismail Williams and Manuel Williams, allegedly high-ranking members of the 26s gang, were caught in Loop Street and had an illegal firearm in their possession. The duo appeared in the Cape Town Magistrates’ Court on Wednesday and the matter was postponed to 11 February for their bail information hearing.