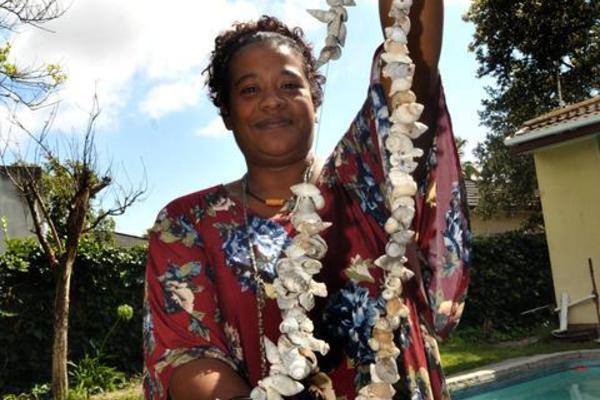 The teacher who was fired after being accused of teaching learners about the devil says her love for Egyptology has been mistaken for Satanism.
During an interview with the Daily Voice at her Kuils River home on Tuesday, Tania Wessels, 29, said she has a keen interest in archaeology
And that teaching learners at Mondale High School how to draw hieroglyphics was grossly misunderstood.

Tania even has a room at her house where she keeps artefacts, bone fragments, manuscripts, old glass bottles dug up in her backyard and books dating back to 1912.

The mom of two, who is also a dance teacher, has a degree in English and Life Orientation, and her parents are both teachers.
Tania says after she was dismissed by Mondale’s principal last week, videos of her made by pupils were shared and went viral on social media, which damaged her reputation and career.

Bronagh Hammond of the Western Cape Education Department confirmed Tania was a contract teacher who was asked to leave on just her second day after pupils complained about her “inappropriate” personal conversations.
In a voice note which made the rounds on WhatsApp, a pupil says Tania had told them that she had been raped by her own father, which she denies, and claimed that she was married to God.

The message further states that Tania claimed she had a towel at her home and when she touched it, it turned into a skeleton with maggots and that a hump on the back of her neck turned into a black spider.
But Tania says the children were “exaggerating”.

She says before starting a lesson, she told the kids a little bit about herself by way of introduction.

On the day the principal fired her, he had walked in just as she was telling a Grade 9 class about hieroglyphics, which she had drawn on the board.

“He walked in and I did this bird and a water symbol. I had the Bible also and referred to the book of Esther where they talk about Egypt,” Tania explains.

“He accused me of believing that I am God’s wife and that nowhere in history does it say God had a wife, and I said if you Google ancient Egypt, then it does, yes, there were ancient goddesses there.

“I said I will not be humiliated and left.”

She says claims of tombs at her home were also exaggerated and points to a wooden slat on the grass: “This is to demonstrate the size of a tomb in Egypt and has nothing to do with Satan. Here are no crosses that are upside down.”

Tania says she knows she has “eccentric” tendencies.

“These are all bones I’ve dug up, and this is an old piece of paper with weird writings on it.

“We even contacted a museum about it. These glass bottles, these types were used by the British colonial secretary during the 1800s and it has to do with archaeology,” she says.

Tania says she was excited to be employed and will be taking matters further with the WCED: “I am a keen archaeologist and Egyptologist, not a Satanist, and this has ruined me.”