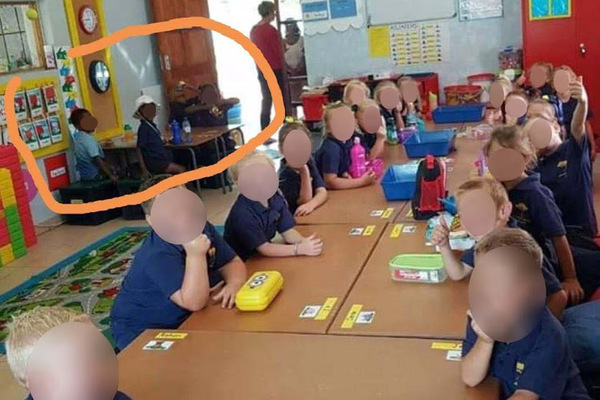 It is being reported that the teacher who was suspended after a photo of Laerskool Schweizer-Reneke Grade R pupils, seemingly separated on the basis of their race, has left the town.

Netwerk24 is reporting that the woman and her family didn't feel safe after a storm erupted over the photograph.

Protesters – many wearing EFF regalia – made their way onto the premises on Thursday morning while North West Education MEC Sello Lehari was visiting the school.


Lehari later announced that the teacher had been suspended.

Netwerk24 noted that the woman was severely traumatised.

While the school's governing body said it was technically open, many parents kept their children at home on Friday.

The photo was posted on social media on Wednesday – the first day of the 2019 academic year – and soon became the centre of debate on racism and race relations, both in Schweizer-Reneke and South Africa at large.

On Thursday, more photos emerged, seemingly from the same set, and they showed the pupils sitting together.

Many parents have defended the teacher, saying she loved all of her pupils.

Meanwhile, parents of black pupils claimed their children have in the past complained about being called klein swartetjies (loosely translated as little blacks).

Most of them spoke on condition of anonymity, fearing their children would be victimised.

The black parents said they wanted their children to get the best possible education in the Afrikaans-medium school and didn't have problems with the school's policy.

The school is the only primary school in town, while there are other schools in the nearby Ipelegeng township.

However, they felt the school should transform and encourage pupils to love one another regardless of race and gender.

Among the parents, was a couple whose child was among those who were seated with other black children in the first photo released.

The father said when he arrived at the school on Wednesday morning, he found black pupils seated behind the door and he asked why this was the case.

"The teacher told me that she separated children because she wanted them to know each other according to their skin colour. The teacher then said the separation was a temporary thing and later during the day, she will integrate them and allow them to mix.

"When I arrived to fetch my son in the afternoon, the situation was the same. I then enquired again and didn't get any answer," he said.

The father said he was shocked when the picture went viral.

"Why should our children be separated by their race? I want my child to continue studying here and I don't have a problem with [him] learning Afrikaans. I was told from the beginning that the school offers Afrikaans as a medium of instruction and didn't have problems with that.

"All I want is for my child to have a better future," he said.

Another parent said in most cases, teachers weren't too blame.

"My child claims that he is being ill-treated by white children in the school. He complains that white children refuse to play with blacks and call them klein swartetjies. My child doesn't know what racism is. He told me that teachers are treating them well, but the problem was among white children. I feel that some white parents are teaching their children at a young age to hate blacks in school," she said.

The South African Democratic Teachers' Union (Sadtu) in the province said it was disturbed and perplexed by allegations of racism in the school.

"It is our firm view that schools, through its education ethos, have the role to instil values of dignity, respect, equality and tolerance for our learners.

"The union cannot be silent when there is a gross violation of rights of learners to receive equal treatment and education. Acts or practice of racism have no place in our society and cannot be tolerated 24 years into our democracy," read the union's statement.

The union called on the North West education department to extensively investigate these allegations and to extend the probe to other parts of the province.

The South African Human Rights Commission (SAHRC) visited the school and met with Lehari and his team at the school on Thursday.

SAHRC spokesperson Gail Smith said the commission would work closely with the department to investigate the allegations.

"Concurrent to this investigation, the provincial department of education will establish a task team to deal with transformation at the school and has invited the commission to participate in the task team.

"The commission is deeply concerned that instances of discrimination and related intolerance continue to take place within the school system. Schools are platforms for teaching and learning – not only a formal curriculum – but also fundamental value systems. While this trend in schools remains highly concerning, we should take this as an opportunity to engage on transformation and foster greater awareness," said Smith.