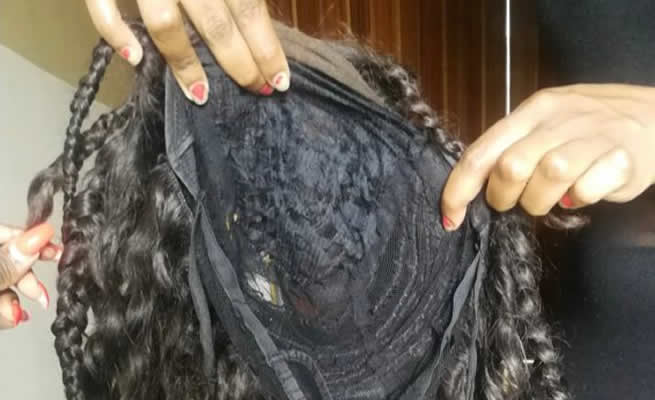 IT’S NOT even a very special wig, but Black Twitter demanded justice! The wig thief was shamed into secretly giving it back to the angry Tshegofatso.

When she opened her door the wig was lying on her doorstep! Mzansi’s Black Twitter is famous for tracking down lost family members and exposing criminals, scammers and unfair bosses.

Tshegofatso Kwinana reported on Twitter that her friend had borrowed a wig that belonged to her. But when it came to handing back the hairpiece, the friend and the wig were nowhere to be found!

Tshegofatso took to Twitter, even posting the friend’s number and begging her friends to help her get her wig back. Twitter sprang into action and didn’t disappoint. Many friends posted messages to the friend with one unified message: “Give back the wig!”

Tshegofatso posted conversations with the friend asking for the wig. But the friend proved to be difficult. She told Tshegofatso that she wasn’t in town. In her replies, Tshegofatso was angry. She reminded the friend she had the wig for six months! She accused the woman of constantly putting off the meeting to return the wig.

“I’ve met you plenty of times, but you always come empty-handed!” she said. In the end Tshegofatso was tired of the excuses and called for Twitter justice.

Twitter embarrassed the friend with titles like “Shameful Wig Thief”. Others called her “An excuse for a human!"

“Girl, I read about you on Twitter,” one text reads. “Take this girl’s stuff back. Why are you embarrassing yourself because your pic is trending.”

Another text reads: “Please return the wig you stole. It’s not yours. Your hands are very naughty!”

Another tweet asked where the wig was. “She’s holding us hostage there on Twitter because of you. Please bring it back!”

One text even begs her to repent: “Return the wig. Give your life to Christ.”

And thanks to the pressure of Twitter, the case was solved! A happy Tshegofatso posted a picture of the wig, saying that it had been returned to her flat. But she also said she wasn’t happy with the condition of the wig. It seemed as if the hairpiece had seen better days!

Thank you all for the messages. The wig has been returned even though it is not in the right state but a win is a win! pic.twitter.com/KrRaMFZoS6