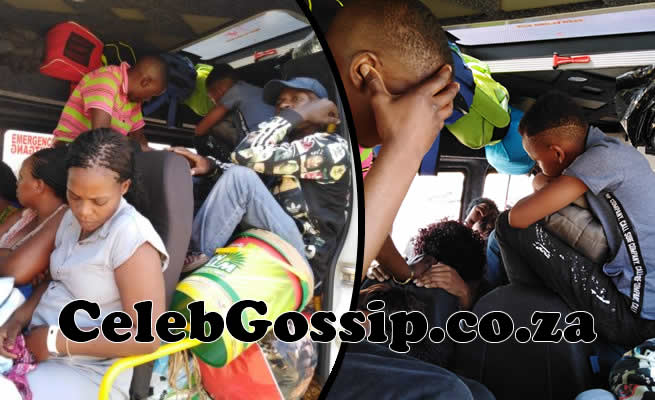 THEY all want to go home to see their loved ones for Christmas. But 44 people in one 22-seater bus was just too much for the cops to ignore.

Traffic officers from Polokwane, Limpopo, stopped the vehicle travelling towards the Zimbabwe border. The 44 people, including seven children, were taken out of the bus.

They were packed on top of each other along with their bags, plastic bags, suitcases and buckets loaded with gifts, food and other items.

[Limpopo] The Public Transport Unit Officers have lost count of the passengers found in this cross border 22 seater on N1, next to Snake park outside Polokwane. We have called the cross border officials to come and authenticate the cross border papers. Drive have no permit. pic.twitter.com/g3y5KAGWQb

Limpopo transport spokesman Matome Moremi-Tauatsoala said the officers lost count of the passengers found in a cross-border 22-seater on the N1 yesterday morning.

“We have called the crossborder officials to come and authenticate the travel documents. The driver has no permit to drive this kind of vehicle.”

On Tuesday a 15-seater taxi was found with 22 passengers in Mokopane.

“The taxi was from Gauteng going to Zimbabwe,” said Moremi-Tauatsoala.

More than 86 drivers have been charged with overloading since the festive season started. MEC Makoma Makhurupetje said they were concerned about drivers’ behaviour on the roads.

“Overloading is a serious offence. It often leads to tyres burst in, which causes serious and fatal crashes. We shall not tolerate overloading. It puts lives at risk. Limpopo remains a zero tolerance zone,” she said.