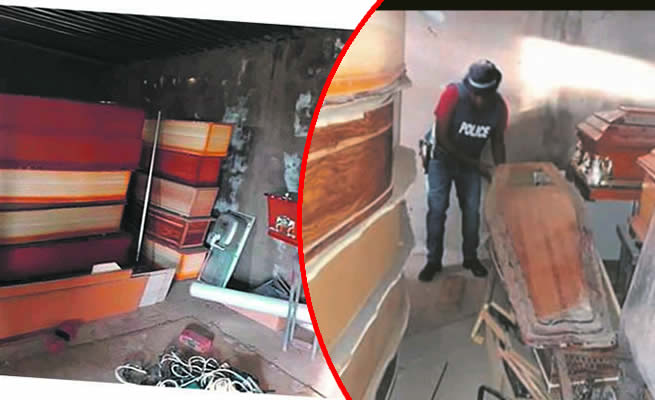 FROM the outside it looks like an ordinary family home.

But on the inside, there is no furniture – only rows and rows of stacked coffins!

It’s alleged a resident tipped off the police about a bakkie offloading strange boxes in the middle of the night.

When police raided the house in Mamehlake, Mpumalanga, they found it full of different-sized dirty coffins.

“We don’t know if they’re used or not. What if the coffins came back with ghosts which used to live in them?” resident Tebogo Maiketso (28) said.

“We only know that the person staying there welded gates and burglar bars. This is a bad omen for the community.”

Johan Rousseau, spokesman for the Funeral Industry Reformed Association, said there have been many cases of people being exhumed so that their coffins could be stolen and reused.

“Police must do DNA tests on those coffins to check if they were stolen and belonged to the dead.”

Cultural expert MoAfrika Gana said coffins were supposed to be carried by people trained to do so, in a way that was not criminal.

“Death is not supposed to be a business, and when people hide it they provoke the spirits.”

Sangoma Mlomowenyoni Sibanyoni said the owner of that house had been exposed by God and the ancestors.

Cops spokeman Sergeant Tladi Matemane said a man was taken in for questioning and cops were investigating.