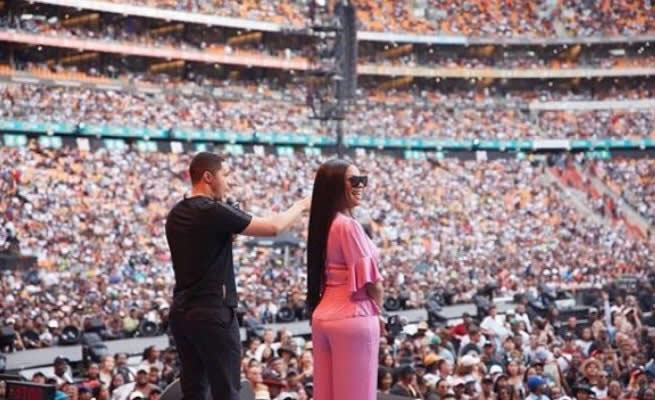 Concertgoers — including a high-profile media personality — have told the Sunday Times how they fought off muggers in the chaotic aftermath of last weekend’s Global Citizen Festival, describing the scene as “apocalyptic” and reminiscent of a horror movie.

One couple said thieves were even stealing phones from other muggers.

A prominent South African media personality and businesswoman, who did not want to be named, said she attended the festival with her husband, their son and two other family members. They left the concert at FNB Stadium in Soweto just before 11pm to avoid traffic.


She was mugged just outside the stadium on her way to the VIP parking area.

“In a matter of seconds I had my phone snatched from me. Some marshals caught him. He said he didn’t take my phone, I said I saw him. I punched him in the face and once I did that he gave me back my phone. As soon as I had my phone, I put it in my bag and while I was still doing this another man came by and snatched my phone.

“He ran away into the crowd. We were surrounded and it was mayhem,” she said.

The celebrity said the stories of people being accosted were disturbing.

“We left the concert on such a high and to be mugged was unfortunate. It leaves such a bad taste in your mouth. For me it was my phone and it’s not the end of the world,” she said.

Avid concertgoers Heema Gopar and her fiancé, Adrian Oberholzer, described the chaos that followed the festival as apocalyptic. The couple have had trouble sleeping since Sunday, saying they are being kept awake by their memories of the screams of fellow festivalgoers.

“At the garage, it felt like I was in limbo, it felt surreal. We were hearing the screams and they didn’t stop. What hurts is that noone came to our aid, we felt abandoned. It all felt apocalyptic, it felt like we were never going to escape,” Gopar said.

Punched in the face

The garage Gopar referred to is the Sasol petrol station 1.4km from the stadium, where the couple’s Uber driver was waiting for them after the concert.

The couple left the stadium around midnight and made their way to the garage, which was supposed to be “an easy pick-up point”.

En route they heard a commotion. Oberholzer said a man grabbed his phone and punched him in the stomach. Responding instinctively, he punched the man back. Gopar heard her partner swearing and turned around to see what was happening. As she did, another man ran past her, deliberately knocking her phone out of her hand. They both tried to grab the phone and Gopar grabbed the assailant by the back of his red T-shirt .

Three other men saw what was happening and tried to get her phone from the first man. The trio then tried to rob the man in the red T-shirt. One of the men punched Gopar in the face and grabbed her handbag.

After fighting off his attacker, Oberholzer turned around and saw his fiancée bleeding on the ground.

“I’ve been doing kickboxing for a while. When he hit me, I saw red and I hit the guy straight in the face with all 120kg of me. I had to do whatever it took to protect Heema, she was my only concern,” Oberholzer said.

Gopar’s right eye was injured and the impact from the punch cut her nose. Initially she felt numb but once it was over she realised what had happened and began crying. The couple will begin trauma counselling this week.

“I’m still a bit shaken and I still haven’t processed what happened. I can still hear the bloodcurdling screams, it was horrific. It happened so quickly, it was so quick how they distracted Adrian and ran off,” Gopar said.

YouTuber Michael Cost and his sister, well-known environmentalist and activist Catherine Constantinides, saw a lot of the chaos.

They hid their phones in their clothes. “When I say it was like a war zone I’m not being dramatic. There were criminals fighting criminals for bags, people were punched in the stomach, stabbed and burnt with cigarettes. We were completely helpless,” Constantinides said.

Cost said he had been prepared for petty theft, but not the mayhem that ensued.

“I saw a group of six men fighting over a purple handbag. There was a lady screaming at a group of men who tried to steal her phone. One man was screaming ‘Who punched my wife?’ and a teenager was bleeding after her phone was stolen.

“There were different pockets of criminals tormenting festivalgoers and there were mini stampedes.”