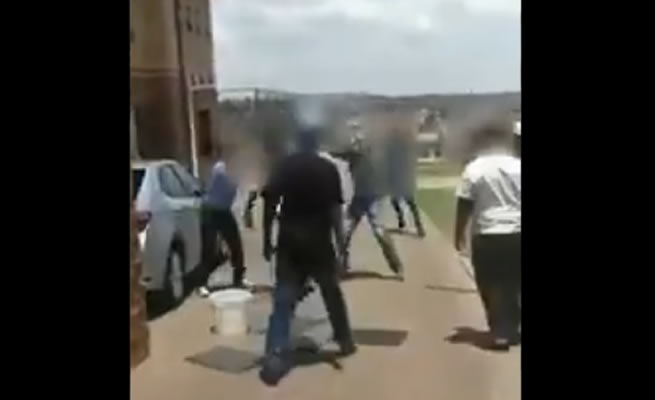 A neighbour of one of the 11 people who were killed in Sondela, Rustenburg, has detailed how the young man was captured by a mob and killed while trying to call his mother for help.

Eleven people have been killed since November 18 in the area following clashes that the community said were between Xhosa and Sotho-speaking residents.

A resident said the 22-year-old man, who cannot be named to protect his family, was killed on Sunday night.

“He was at his place when the mob arrived. They were looking for a man who had rented out a gun to someone. My brother [referring to his neighbour] panicked and took out his phone to call his mother while they were still interrogating the other guy. The men thought he was calling the police. They took him, along with the other guy, and killed them,” he said.

Yesterday, the man’s family said he was found dead next to a hostel on Monday. Life has not been the same in the neighbourhood since the incident.

“I was called at 6.30am on Monday at work and I was told that something had happened at home. I left work and rushed home. When I arrived I was told that the boy is missing,” said the man’s uncle. “We began to search for our boy but we found one Sotho guy killed not far from where we are. Another man was burnt to death at a car wash. We later found our boy dead next to Jabula hostel. There was another body of a man who was also burnt with him. We don’t know why he was killed.”

As the uncle detailed the horror of that morning, the man’s father sat quietly, heartbroken under the shade where the family had gathered to prepare for his burial.

Police said five people were found dead on Monday while the other six died between November 18 and 24 in fights between a group of Sotho men known as Marashia and Xhosa men.

The neighbour said the killings began when one Xhosa man allegedly attacked a Sotho man over a woman who some say is extremely beautiful and qualifies to be South Africa's sexiest woman. When the man later went to watch soccer at the local grounds, he was allegedly attacked by Sothos, triggering the mayhem.

Tit-for-tat killings began with rival groups raiding homes in search of their “enemies”.

“They raided houses, stole goods and even women would be beaten. They did not care. We now live in constant fear in this place. Some people have fled,” said a woman.

Yesterday the streets of Sondela looked peaceful, with miners returning from work and, a picture residents said was deceiving as the peace is often shattered under the cover of darkness.

“The nights are a nightmare. We do not go outside because we fear we would be killed,” the woman said.

Police spokesperson Brigadier Sabata Mokgwabone said six people have been arrested in connection with the killings.

“Investigations on the murders are still on. We are expecting to make more arrests soon,” said Mokgwabone.

Sondela is largely a shantytown populated by mineworkers. There are few formal structures.

Meanwhile two men appeared in the Rustenburg magistrate’s court on charges of kidnapping and murder.

The public and the media were not allowed in court because police were yet to conduct an identity parade on the accused. The National Prosecuting Authority said the four other men were expected to appear in court today.