Home General News Dating another man's girlfriend gets too costly for Thabiso: "I picked up... 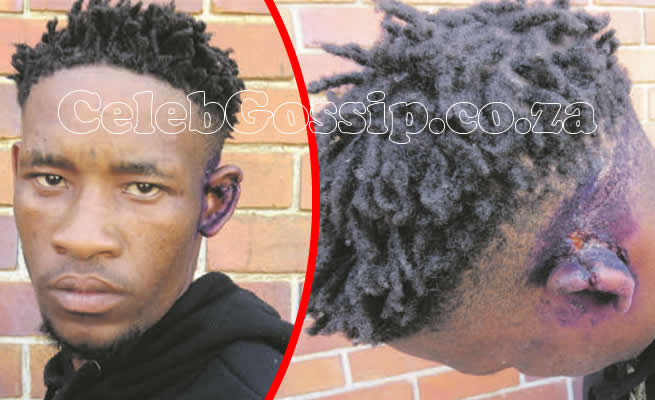 THABISO Vasane thought he had found the perfect girlfriend. He was even spending money on her and planning to marry her in the near future.

But he got a bloody wakeup call! One of his ears was slashed off by a man who accused him of having an affair with his girlfriend.

Thabiso was rushed to hospital on Saturday after the incident. Luckily, doctors managed to stitch his ear back onto the side of his head. Thabiso, from Brandvlei outside Randfontein, is now in pain but grateful he still has his ear.

“I just thank God that doctors managed to stitch it back, otherwise I would not have this ear,” he said.

Thabiso said his nightmare started in a tavern on Saturday.

“The man found me with the woman and asked what was I doing with her. I told him she was my girlfriend and he got violent. He took out a knife and slashed my ear. It fell onto the floor and I rushed to pick it up. He went wild. The other patrons in the bar tried to stop him, but he was crazy. Maybe he would have stabbed me to death had he not been stopped.”

Thabiso said he met the girl in the tavern several months ago. He said one of the patrons stopped a passing taxi to take him to the hospital.

“I am still young and I have a future ahead of me. I don’t want to die for a woman. I regret meeting that girl. She lied to me that she was single, knowing that she had someone. These days you don’t know who to trust. I almost died because of her.”

“The man was arrested and will appear in court soon,” she said.