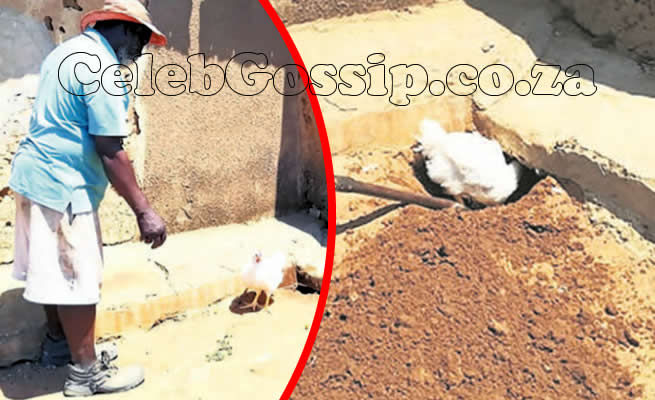 FOR MORE than a year the Radebes suffered at the hands of an evil tokoloshe. But it took a chicken only two trips and a few scratches around the house… then it pointed out the exact spot where the muthi was hidden!

Since August last year, the Radebes from Bosplaas in Hammanskraal, Tshwane, have been haunted by bad luck.

“Since last year from about 7pm, there was a strange noise in the yard. But when we went to check we could not find anything,” said Jacob Radebe (72).

In August his brother Stanley (58) died mysteriously after his body started swelling. And then his daughter, Jabulile (21) had a miscarriage in September.

“After her miscarriage she moved out. She was tired of the evil tokoloshe’s noises at night,” said Jacob.

He said he has also lost three goats. “I thought an evil spirit was involved. I ended up alone in the house. We went to four different traditional healers. They told us about the tokoloshe that was terrorising us. They sprinkled muthi in the yard, but they could not help us remove the evil thing,” he said.

A sangoma, Dr Lekuwa Kato, took it on himself to help the family out. He instructed the family to buy a chicken to help with a ritual. Dr Kato came to the house on Thursday. First he sprinkled muthi around the yard, then he performed a fire ritual with the chicken. When he put the chicken on the ground it did not hesitate. It walked around the house twice, followed by the sangoma and the amazed Jacob. Then it came to a dead stop at a corner where it started scratching and made a strange noise, as if it was sending a message.

The sangoma moved the chicken aside and they started digging. The digging started and they found beads, a cross, animal bones and strange smelling muthi. But the chicken was not satisfied. It kept going back to the hole. The sangoma dug some more and found other items.

“Jacob said he wanted to apologise to the person who is doing this to him and my family. I don’t remember exchanging words with anyone,” he said.

Dr Kato said: “This family was going to bury someone every year until there was no one left to bury. It is just jealous, evil people who want to see people suffer. I hope the family will now find peace.”

Captain Sarah Lesabane of the Hammanskraal police station confirmed that Jacob Radebe had opened a case.

“We are busy with investigations after a resident of Bosplaas opened a case of stock theft after three goats were reported stolen,” said Lesabane.