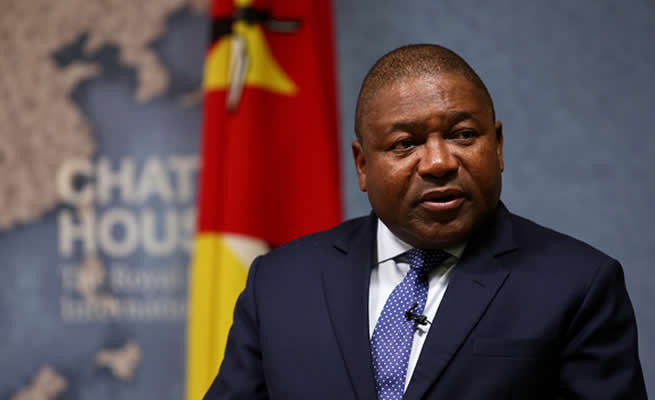 Mozambican President Filipe Nyusi’s son has allegedly pulled a Grace Mugabe-like stunt on the son of a Gauteng MEC and ANC heavyweight in two separate incidents in Joburg last week.

Florindo Filipe Jacinto Nyusi allegedly assaulted the MEC’s son, Dr Amogelang Manganyi, and smashed his cellphone at a top Sandton restaurant before threatening to blast his brains out with a gun. After the fight, Jacinto allegedly added salt to the wound by hurling about R2,000 at Manganyi and screamed at him to go repair his cellphone.

When the irate Manganyi refused, Jacinto allegedly took the phone, removed the SIM card and left with it claiming that he was taking it to an intelligence unit within the SAPS for forensic investigation.

Manganyi, a former Wits University SRC leader, opened a case of intimidation, assault and malicious damage to property at the Parkview police station against Jacinto.

Like Mugabe, Jacinto also seems to have gotten away with his alleged transgressions as he had not been arrested almost two weeks after Manganyi opened the case against him.

Relating his ordeal to Sunday World, Manganyi said he and his friends were enjoying supper at a restaurant in Sandton two weeks ago when he gave one of his friends his top notch iPhone 8 to take pictures of them. He said because it was dark the phone’s flash light also illuminated the area where Jacinto and his phalanx of bodyguards were seated.

“About eight or nine bodyguards confronted us and asked why we were taking pictures of them and the son of the president. They then grabbed the phone from my friend,” he said.

Manganyi said when he tried to investigate what the beef was about, Jacinto violently pushed him before taking the cellphone from one of the bodyguards and threw it to the floor, stomped on it and damaged it.

“When I begged these guys to explain what was really going on, the other bodyguard told us to back off and asked us if we really wanted to die for a cellphone. They started swearing at us. So this guy, the son of the president, took some bank notes and threw them at me and said I should go fix the phone,” he said.

The medico said he then approached the restaurant’s security officers and asked them for protection but they refused and said they were scared because his attacker was the son of the Mozambican president.

“He then left with my cellphone with his bodyguards and got into two MercedezBenz minibuses and a white BMW. When we approached the cars to write down the registration numbers, some guy got out of the bus, introduced himself as Joe and ordered us not to come anywhere near the cars or else they would shoot us,” he said.

He said Joe told them to rather follow them to the ritzy Westcliff hotel to try and resolve the matter.

He said when they arrived there, Joe told them Jacinto ordered them to take his cellphone to the intelligence unit for forensic investigations.

Manganyi said he then left and proceeded to open a case with the Parkview police.

“But to date nothing has happened. This guy damaged my phone and took it with. He basically assaulted me and threatened to shoot me simply because he thought we were taking pictures of him. What have we done to be disrespected and violated like this in our own country?” he asked.

He said he alerted the international relations ministry and Mozambique embassy in South Africa about the incident and was hopeful they would assist him to see justice happen but still awaits their responses.

Manganyi’s friend Aluani Nwedamutswu said he was shocked when one of Jacinto’s bodyguards grabbed Manganyi’s phone out of his hand.

“I am the one who was taking pictures using Amo’s phone. After the bodyguard took the phone from me, he gave it to Jacinto who stepped on it multiple times. He accused us of taking a video of them,” he said.

Nwedamutswu said Jacinto took money out of his pocket and threw it at them and said they should use it to repair the phone.

International Relations spokesperson Ndivhuwo Mabaya could not be reached for comment.

A staff member at the Mozambique embassy provided us with a gmail email address for questions. The questions had not been responded to at the time of going to print.

The other bodyguard told us to back off and asked us if we really wanted to die for a cellphone.