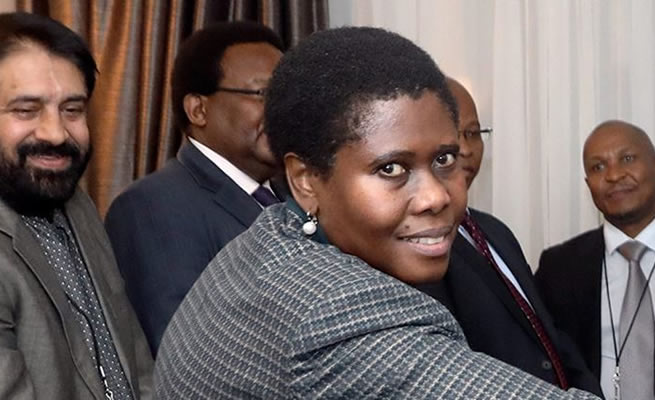 A mutiny is brewing in SA’s top spy agency after the state security minister ordered a revetting of all agents in a bid to flush out spooks accused of looting the slush fund of up to R1bn.

The drastic move to vet all spooks afresh follows minister Dipuo Letsatsi-Duba’s decision to dismantle the entire management structure of the SSA, which she says was set up illegally to loot state funds.

It has been met with fierce resistance, with a forum that represents all intelligence and non-intelligence employees blasting her in a letter to staff, urging them to reject the new management structure.

This has irked the minister, who has described the forum’s action as “serious misconduct” and an attempt at mutiny. The chair and secretary of the forum have been suspended.

“Of concern to me was when they were challenging my authority as the minister, which I’m given by the constitution, saying to members: ‘Do not go back to the old structure, don’t take the instructions of the minister,’” an agitated Letsatsi-Duba said in an interview with the Sunday Times.

“That to me was a mutiny. They are revolting against the instructions of the authority. That, I couldn’t take.”

But the affected spooks say her actions are politically motivated, and they are calling for her head.

“This is nothing but a political ploy to purge people. They are dealing with those who they think were [Fraser’s] henchmen. This minister is clueless, she must go,” said a top spook who asked not to be named.

The minister would not give details on what the vetting process would entail, but it usually includes a polygraph test, thorough background checks including looking into personal and business associates, lifestyle audits and financial trails.

The SSA employs 3,600 people. The vetting will be “sporadic” in that agents will be vetted at different times.

The agency has been in turmoil for years. Fraser was redeployed by President Cyril Ramaphosa earlier this year after a bitter battle with the inspector-general of intelligence, Setlhomamaru Dintwe. He was investigating allegations that Fraser had set up a parallel intelligence structure staffed by his cronies, and even family members, who used their access to resources to loot covert funds. Fraser called the allegations a tactic to smear his name.

Ramaphosa has set up a review panel headed by struggle veteran and academic Sydney Mufamadi to determine what went wrong and propose a new working model for the agency.

On Tuesday, the minister issued a terse communiqué to all agents and administrative staff, announcing the decision to re-vet all employees. The re-vetting will be done by the South African Police Service and the intelligence arm of the South African National Defence Force. Those who fail to obtain security clearance risk being dismissed.

“Due to recent developments in the State Security Agency, which border on serious misconduct and ill-discipline by intelligence officers, the minister has taken a decision for a sporadic re-vetting of officials, which will be suitably performed outside of the agency,” Letsatsi-Duba wrote to staff. “The misconduct borders on a serious security risk and threatens the integrity of the institution. The minister has taken serious note of this and decided that such behaviour cannot go without action.”

She told the Sunday Times she had inherited an institution in a state of paralysis. She said she discovered that agents had been sitting at home for up to five years pretending

to be doing state security work when in fact they were looting slush funds and collecting pay cheques every month. The minister said the parallel structure was illegal and not in line with the General Intelligence Laws Amendment Act of 2013.

“What prompted this response [from the staff forum] is because when we arrived, as part of restructuring and cleaning up, we discovered that the agency has been operating on an illegal structure.”

She said those calling on spooks to defy her orders were the main culprits in the looting spree.

“There was an outcry about the abuse of the covert funds and state resources in this institution. We came in and closed all those taps. This structure I’m talking about was an outfit designed to loot. When we say go back to the old structure, we are threatening their survival in terms of accessing the resources of the state. It’s about themselves.”

The SSA’s budget, staff composition and operations are classified, but those in the know speculate that the agency gets around R4bn a year for operational expenses.

In his book The President’s Keepers, Jacques Pauw writes that the Principal Agent Network (PAN), set up under Fraser to strengthen intelligence gathering capacity, may have looted up to R1bn in the three years of its existence. Under the project, Pauw wrote, 293 cars — mostly luxury BMWs and Mercedes-Benzes — were bought and R20m spent to warehouse them in Gauteng and the Western Cape. Fraser has rubbished these allegations. An investigation by the then inspector-general of intelligence Faith Radebe found nothing untoward with the PAN operation.

Letsatsi-Duba dismissed insinuations that she is using the re-vetting exercise to purge those loyal to Fraser and Zuma. “Seated here I don’t know who is loyal to Zuma, who is loyal to Arthur Fraser,” she said. “When I enter the door of the SSA, I see South African intelligence officers who are at work. I don’t know who belongs to who. The vetting will assist us to determine whether intelligence officers are fit for purpose or not. If you have an element of mutiny in the agency, then you must know you are sitting with a security problem.”

But the forum’s members have written to Ramaphosa asking him to replace her with someone more competent.

“Since mid-April the SSA has been on auto-pilot and, frankly speaking, we are in desperate need of a fit and proper captain to rescue us,” they wrote.

They also accused Letsatsi-Duba of shifting all administrative power from the director-general and other senior managers to centralise it at Bogare Building, the ministerial offices in Tshwane. They described the minister’s stated commitment to “restore the integrity of the organisation” as an insult to intelligence officers.

“The organisation is the sum of its members, so what the minister is implying is that members in this organisation lack integrity. That is the worst form of insult to any intelligence officer.”

They have given Ramaphosa seven days from receipt of their letter to remove Letsatsi-Duba, failing which, they said, they will forward their grievance to parliament.

Letsatsi-Duba refused to divulge when the re-vetting exercise would happen, how long it would take or how much it would cost, saying such details were confidential and could not be shared publicly.

Joy Peter, spokesperson for minister of defence Nosiviwe Mapisa-Nqakula, confirmed receipt of the request to assist with the re-vetting. She said the minister was “applying her mind to it”.

Police minister Bheki Cele’s office also confirmed it had received the request for re-vetting. It said the matter would be handled by the national police commissioner.