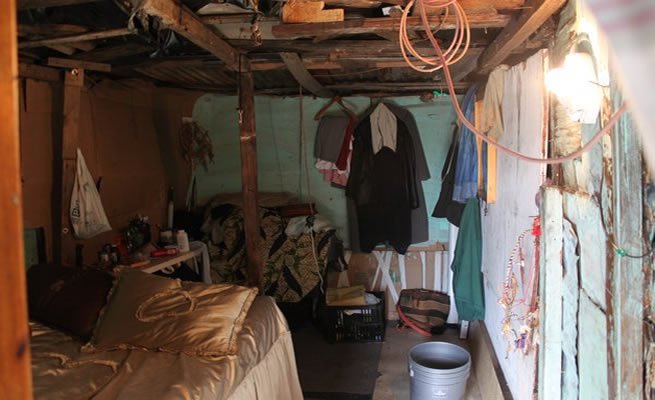 EVERY time they tried to settle down on an open piece of land, officials would evict them.

After several such failed attempts to put down roots on land around Mfuleni, Khayelitsha, Cape Town, some backyarders decided to pull together.

Instead of each family building a small shack, they pooled their resources and built one big, hall-like shack which houses 10 families.

At first more than 200 people shared the shack, located on open space in Sondela, but it is currently home to 139 adults and kids.

Men, women and children cook together and sleep in beds that are lined up close to each other.

There are not many belongings inside the shack besides beds and cooking pots, which are often stolen.

“Law enforcement officials destroyed our shacks and took our building materials in March.

“We built this big shack together because we did not have anywhere else to go,” she said.

Ntombizodwa Delihlazo (37) said they would leave if they had other options.

“It is not safe here, but what choice do we have?” she asked.

Ntombizodwa said that people who frequented a nearby tavern told them they lived like animals.

“Our wish is to spend Christmas in our own homes with our own families,” one resident said.

When the SunTeam visited the shack, most residents were out working or hunting for jobs and food.