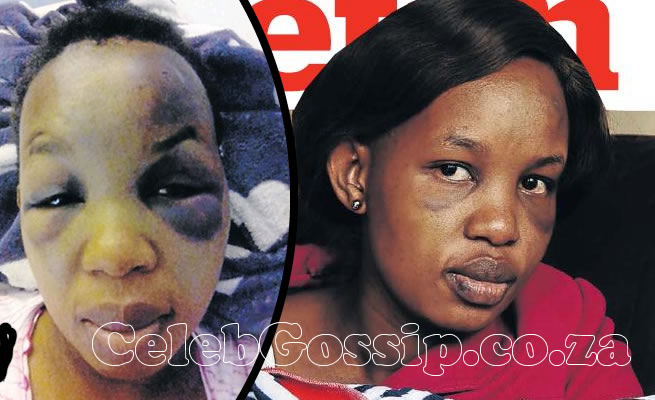 A Mpumalanga woman has accused nurses at Middelburg Hospital of severely beating her up and leaving her to give birth on her own.

Speaking to Sowetan yesterday, Mavis Sikhosana, 28, who has since opened a criminal case against the hospital’s staff, said nurses were also rude to her when she was at the facility to give birth two weeks ago. Sikhosana, who still has bruises all over her face, cried as she recalled how she was also made to clean up her vomit while she was still in labour on October 24.

She said she felt nauseous upon arriving at the hospital and asked a nurse for a bucket so that she can vomit in it.

“I fell asleep and was woken up by the nurse. She said to me, ‘hey wena [you], wake up and clean up your vomit’. I was weak and experiencing contractions but I gathered enough strength to discard the vomit inside the toilet.”

Sikhosana said the situation grew worse as her labour pains intensified but the nurse complained about her screaming and later left the room.

“I didn’t have the strength to call out for the nurse and asked another patient in the ward to help me call for help.”

Sikhosana said she delivered her baby came out before a nurse came into the room. She said the nurse who finally came to assist her moments after the baby was born told her that her colleague, who was supposed to help her deliver the baby, was sleeping. Sikhosana said she passed out and fell asleep while the nurse was cutting the umbilical cord.

“When I woke up I had bruises all over my body and face. I was in pain.” She said nurses told her she fell but she did not believe them. “I believe the nurses beat me up. They were trying to kill me in order to avoid getting in trouble for neglecting me while I was in labour.”

Sikhosana said she was transferred to the Witbank Hospital the next day where her injuries were treated but she was brought back to Middelburg a few days later. Mpumalanga police spokesperson Brigadier Leonard Hlathi confirmed a case was opened.

“She was taken to Witbank Hospital. The doctor there summoned the police to come and look at the condition of the woman. According to the information contained in the statement, we do not have indication that the woman was beaten. “We then saw it fit to open a case that has got to do with negligence on the side of health practitioners. If new facts surface indicating that she was beaten then we will look at assault,” Hlathi said.

Sikhosana said: “I want those nurses to pay for what they did to me. I want justice.” Her sister, Poppy Mathibela, said they were shocked to see her covered with nasty bruises when they went to see her. “When I saw her… she looked like she had been beat- en up with a hammer. My mother started crying,” Mathibela said.

She said she then decided to take pictures of Sikhosana’s bruised face with her phone. Mathibela said when they went to see Sikhosana in Witbank, nurses there said her condition was too bad.

“They said she was covered with blood [when she arrived] and they had to clean her up before doctors could assess her,” she said.

Sikhosana’s mother Sarah Sikhosana said: “I am stressed. My daughter was not safe in that hospital. They tried to kill my child.”

Yesterday, spokesperson for the provincial health department Dumisani Malamule said they were aware of the case.

“We have launched an investigation to find out what really happened. And once we know, we will be able to give a proper response and be able to say what will happen going forward,” Malamule said. Sikhosana said her baby was fine.