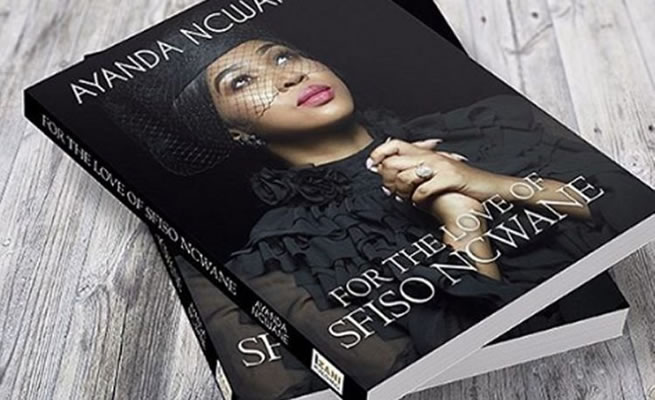 Ayanda Ncwane has been promising us a book in her late husband, Sfiso Ncwane’s honour and this week her project is set to hit shelves around the country.

Ayanda began writing her book, titled For the Love of Sfiso Ncwane earlier this year; just a few short months after her husband had passed away from kidney failure. While she was understandably grieving the loss at the time, she was determined to see her project reach fruition and this week, after months of creative labour, the dedication to her late husband is finally out.

So what exactly is the book about?

The non-fiction title serves as the ultimate tribute to one of South Africa’s most influential gospel artists.

Ayanda was determined to tell his story in a truthful manner and even noted that, following his death in 2016, many people around the country were trying to taint his image now that he could no longer defend himself.

“I want to tell our story, our way. There are a lot of untruths about Sfiso’s life on the internet and that has been reported by the media, and I want to give his fans the truth about his life. The past 15 months and writing the book was extremely emotional and I can’t wait to share this information and journey with fans at the book launch.”

Over the course of the past weekend, Ayanda took to social media to reveal that For the Love of Sfiso Ncwane would finally be available for purchase at CNA and Exclusive Books stores around the country. She also shared the book’s cover; which sees a grieving Ayanda Ncwane, in an all-black outfit, capped off with a funeral hat and veil.

The widowing author was overwhelmed with emotion as she revealed that the book was now available for South Africans to read.

“I know most of you couldn’t wait for this book. It gives me joy to let you know that it is officially out in stores and Amazon. Kindly join me as we hit off for the book signing tour, first stop is next week Saturday at Exclusive books in Nicolaway from 10am (sic),” she said.

Morning, it is my pleasure to meet the people from the South of Joburg on the 17th November 🤗💕 . Your request have been heard, I will be there from 10am to sign your books . God bless you ☺️.

Ayanda will now commence a book tour across the country and has already notified her followers of dates when they can not only pick up copies of For the Love of Sfiso Ncwane, but also have them signed and meet Ayanda.

Healing from the death of a loved one is difficult enough, but being able to channel that grief into a product such as this requires incredible volumes of mental strength.

Ayanda’s achievement should not be looked down upon and it will be interesting to see how Mzansi receives her debut editorial offering.