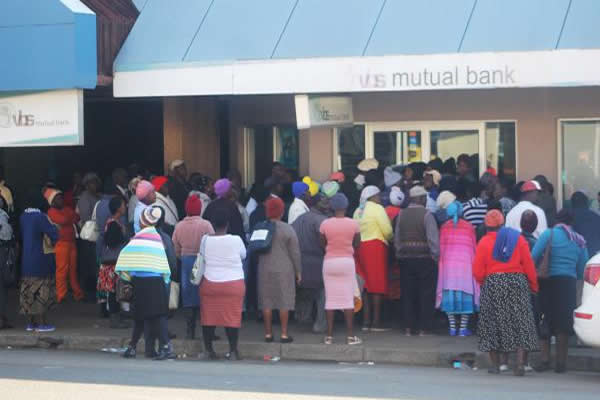 The ANC scored a R2m “donation” from the bosses of VBS Mutual Bank who sought political cover as they helped themselves to the funds of municipalities, the poor and stokvels in a R2bn looting spree.

The Sunday Times is in possession of a series of shocking WhatsApp exchanges in which VBS bosses refer to the money, apparently paid to a service provider during the party’s 2016 local election campaign.

The exchange also throws light on how VBS bosses tried to mislead the Reserve Bank and other regulators as they paid out millions in the form of bogus loans.


The ANC scrambled yesterday to distance itself from the VBS fallout, the biggest financial scandal since democracy was ushered in with the 1994 elections. The bank is now in provisional liquidation and was recently the subject of a scathing report, “The Great VBS Bank Heist”, by advocate Terry Motau.

The party has so far admitted only to receiving R250,000 to “buy” a table at its 106th birthday celebrations held in East London in January this year.

Spokesperson Pule Mabe said this week the ANC had no record of the R2m donation, but said it would launch its own probe. It has undertaken to pay the money back, if it was received, and also the R250,000.

In the series of WhatsApp and e-mail exchanges, VBS majority shareholder Tshifhiwa Matodzi, who is the former executive chair of Vele Investments, and the former head of the treasury at VBS bank, Phophi Mukhodobwane, discuss moving funds between various accounts and hiding the bank’s real financial situation from the Reserve Bank and other regulators.

The WhatsApp messages is new information obtaned by the Sunday Times, which was not part of the information given to investigators during the probe into the collapse of VBS.

They discuss paying facilitators to secure deposits from municipalities and state institutions.

In an exchange on December 28, they discuss how the then ANC treasurer-general Zweli Mkhize, who is now minister of co-operative governance and traditional affairs, allegedly requested a R2m donation from Vele in 2016 in return for helping “raise money” from municipalities and state institutions.

Mkhize has admitted to meeting VBS executives but denied promising to facilitate deposits on their behalf.

Matodzi is named in the Motau report as the mastermind behind the looting at VBS.

Fictitious deposits were created on the bank’s system, allowing money to be moved from VBS to pay for the acquisition of various companies on behalf of Vele Investments, as well as to pay for the lavish lifestyles of the company’s executives. Ten Limpopo municipalities, two in Gauteng and one in Mpumalanga invested a combined R1.5bn in VBS.

In their correspondence, Matodzi complains to Mukhodobwane about how Mkhize allegedly promised to fund-raise for VBS but never did.

“Mkhize didn’t do anything, he came to VBS promising to raise money for us and it never materialised. During the local gov [government] elections he asked we pay some service provider 2 mil [R2m] which we did in return of him raising money for us, which he never did,” Matodzi says.

“The truth is everybody knows how Mkhize works so we also deliberately avoided working with him.

“He raises money for himself, not for [the] organisation, plus he never fulfils [sic] his promise,” Matodzi says.

Mkhize yesterday told the Sunday Times he had once been invited to VBS offices to meet its executives but said no business dealings or donations were discussed.

He said all donations to the ANC were recorded and could be verified with the office of the current treasurer-general.

“If other funds were exchanged with VBS in the name of the ANC while I was still the treasurer-general of the organisation, I am quite keen for this to be disclosed in full so we can expose such scams publicly,” he said.

Mkhize said that as party treasurer he met various businesses, both listed and unlisted, which presented business plans and other ideas. He denied using his influence to secure contracts for them.

“The insinuation that when I engaged with business it was with an unscrupulous intention of doing them a favour or using undue influence for them to secure work, contracts or deals with government departments, municipalities or state-owned entities, is false, unfounded and demeaning.”

The Sunday Times has independently verified the authenticity of the transcripts with two separate sources.

Matodzi did not respond to detailed ques-

tions sent to him relating to the conversations he had with Mukhodobwane. He referred all queries to the liquidators of Vele. They could not be reached for comment.

The Reserve Bank this week said it was unlikely to recover the money looted from VBS. Matodzi is said to have benefited to the tune of R325m while Mukhodobwane received R30m.

The transcripts show how Mukhodobwane and Matodzi on several occasions expressed concern about the bank running out of cash, discussing the possibility of obtaining a temporary loan facility.