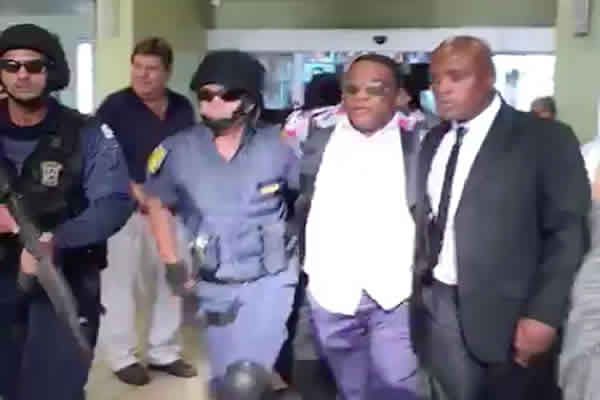 Due to his overnight notoriety a video of pastor Timothy Omotoso getting arrested during what has been hailed as an attempt to flee the country has resurfaced and the video is causing a lot of confusion.

The video was initially filmed in April 2017 by an unidentified person and has recently resurfaced because of the pastor’s ongoing high-profile trial in which he and two co-accused, Zukiswa Sitho and Lusanda Sulani, face a total of 97 charges, with 63 as main charges and 34 as alternative charges.

They allegedly trafficked more than 30 girls and women who were from various branches of his church to a house in Umhlanga, KwaZulu-Natal, where he allegedly sexually exploited them.

He also faces five additional charges of fraud and for being in the country illegally.

The pastor was arrested on April 20 last year by the Directorate for Priority Crime Investigation, known as the Hawks, at the Port Elizabeth Airport and the video which has been doing the rounds on social media was filmed on that day.

Omotoso’s defence Peter Daubermann applied on behalf of his client for Judge Mandela Makaula to recuse himself citing claims that Makaula had allowed his humanity to get the better of him “and unfortunately I have to criticise you on those comments”, said Daubermann.

Daubermann outlined that Makaula wishing Zondi well in her exams had led him to think Makaula was sympathetic towards Zondi.

Quoting Makaula, Daubermann said comments such as “leave it to us” meant “leave it to me to see that justice is done on your behalf”.

“I understand what happened, my lord, but it’s not your job to consult with the witness. A judge cannot hint bias,” added Daubermann.

Makaula turned down Daubermann’s request but postponed the trial to Thursday for the lawyer to seek further legal advice.