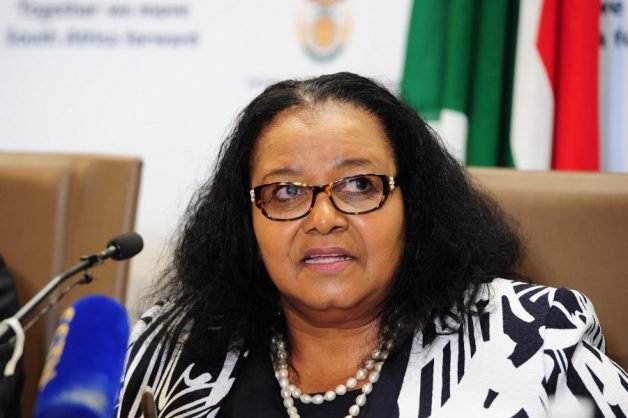 Government has announced the dates for the official memorial and funeral services of late Environmental Affairs Minister Edna Molewa.

Molewa's official funeral will then take place on Saturday, October 6. Both the venues for the memorial and funeral services are still to be confirmed.


The Inter-Ministerial Committee (IMC) on State funerals, led by minister in the Presidency, Dr Nkosazana Dlamini-Zuma, had met earlier on Monday to discuss arrangements for the services.

Molewa, 61, died at a Pretoria hospital on Saturday after contracting a virus in Beijing. She had accompanied President Cyril Ramaphosa to the Chinese capital on a state visit earlier this month.

She was hospitalised in Pretoria on September 8, just days after returning. Molewa did not respond to antibiotics and doctors decided to medically induce a coma, according to people close to her. Molewa awoke from the coma and seemed stable. Over the weekend, however, her condition worsened.

Her brother Fana Mmeti says the family is aware that she belonged to all South Africans.

He says she will be laid to rest in the first week of October to give South Africans enough time to mourn her.

“As the family, we have agreed that we’re going to bury her on 6 October.”

Chairperson of the environmental affairs committee Philemon Mapulane says she played a pivotal role in the adoption of the historic climate change agreement in 2015, known as the Paris Agreement.

“The Paris Agreement that we have and that is celebrated throughout the world will help the world transition from a high carbon intensity economy to a low-carbon economy.”

Several leaders are expected to pay a visit to the late minister's home while the country is in a period of national mourning.

The late Minister Edna Molewa died from Legionnaires' disease – an extremely acute form of pneumonia, her family said on Sunday.

"Our sister passed away yesterday [Saturday], 22 September 2018 following complications of Legionnaires' disease," said the minister's brother Fana Mmethi in a statement issued on behalf of her family.

"Knowing she had been ill has done little to lessen the blow," expressed Mmethi, adding that the family was "bereft".

Her brother said that her loved ones were finding it difficult to accept her death "given that she was cut down in the prime of her life when she still had so much to offer to her family, her friends, her colleagues, her church, and to her community".