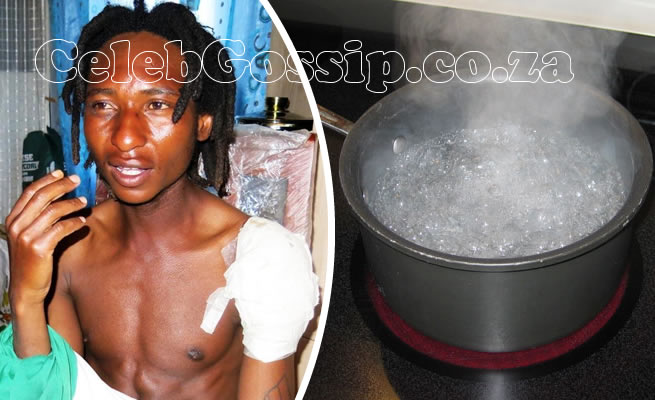 WHEN they first met, it was love at first sight.

But for the past two years, Zakhele Makwevana was allegedly abused by his 43-year-old sugar mama.

The 27-year-old from Khayelitsha kasi in Mangaung told Daily Sun he eventually decided to call it quits on Monday after she threw hot water over him and threatened to stab him.

Zakhele said the incident happened after he came home earlier than usual and found his girlfriend bonking another man in their shack.

“I didn’t fight them as this was not the first time I had come home to such a sight,” he said.

“After she noticed I was packing my clothes, she became angry and accused me of stealing her money. The kettle was on the stove and she unexpectedly threw hot water over me. After that she chased me with a knife and threatened to stab me if I left her. I suffered burns to my face, shoulders and thighs and had to go to hospital for treatment. ”

Zakhele said he met his sugar mama through his mum.

“She would spoil me and clean for me, but a few months after the relationship started she turned into a monster. I was afraid to tell people what she did to me as I thought I would become a laughing stock. I opened a case against her after the ordeal.”

According to Zakheke, the ex-girlfriend was released on bail on Wednesday.

He said: “The woman has been calling me asking for forgiveness and wants us to fix our relationship. I made it clear that I want to move on and told her not to call me again.”