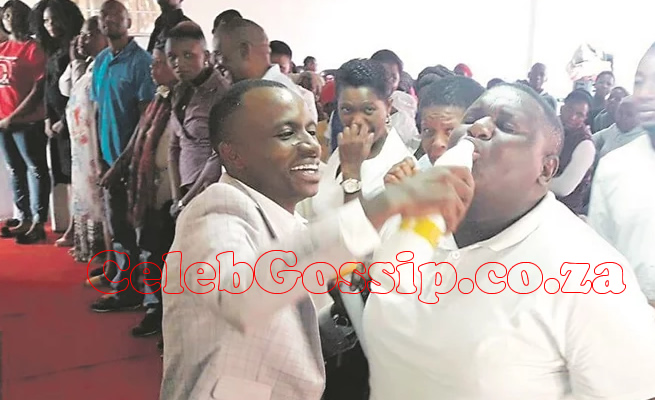 VILLAGE prophet Rufus “Advocate General Prophet” Phala is at it again. First he made headlines after he gave his congregation Dettol to drink. And now it seems he’s giving them Jik!

The prophet, who claims to be a servant of God, told his congregation what they were drinking wasn’t Jik but Jesus Christ’s blood.

The prophet from Ark Centre Ministry in Makgodu Village outside Polokwane, Limpopo told Daily Sun he could turn the Jik into the blood of Jesus.

The incident happened about a week ago during a miracle service where congregants lined up to drink the deadly substance.

“Yes, it was Jik before I made the declaration. But after I declared it to be the blood of Jesus Christ it means it’s no longer Jik so it won’t harm anyone who consumes it.”

He likened his act to the Bible, where Jesus gave his servants’ wine to drink but had said to them “this is my blood”.

“When this chemical is consumed it will undoubtedly cause corrosion of the oesophagus (the pipe that takes food to the stomach) and ultimately the stomach, too.”

Dr Makhomisane said a person who drinks it will suffer from internal damage and bleeding.

He said that could lead to aspiration pneumonia, which causes people to vomit into the lungs, making it impossible to breathe.

Limpopo police spokesman Colonel Moatshe Ngoepe said they had not received any complaints.

He urged the affected congregants to come forward and open a case so cops could investigate.

Thoko Mkhwanazi-Xaluva, chairwoman of the Commission for the Promotion and Protection of the Rights of Cultural‚ Religious and Linguistic Communities, told Daily Sun they condemned such acts in the strongest possible terms.

She said this was an act of people seeking popularity.

“A true man of God will not do such,” she said.

“We’ll be meeting with the religious umbrellas on Thursday to have a conversation about such acts. We want them to stand up and say, ‘Not in our God’s name’.”