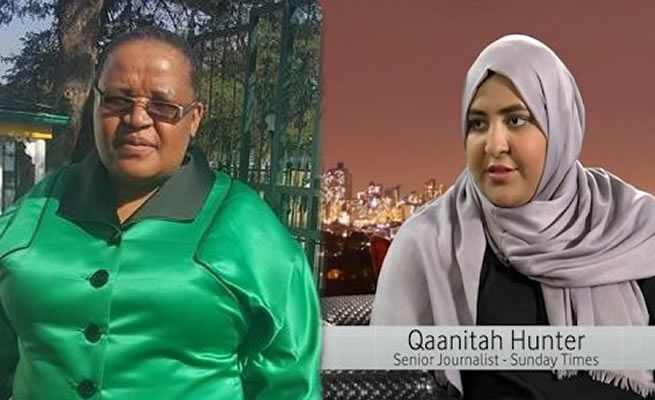 The alleged Jacob Zuma and other senior ANC officials' plot to oust President Cyril Ramaphosa has reportedly turned nasty amid reports that the Sunday Times' journalist who co-wrote the article has received death threats.

Qaanitah Hunter who wrote the story in collaboration with veteran journalist Jeff Wicks which has shaken South Africa has revealed that she was allegedly promised to pay for the deadly story with her own life. According to IOL, Hunter said ANC Women's league Secretary-General Meokgo Matuba sent her a picture of a fire arm.

I hear all the denials. But what I really don’t understand is why the SG of the ANCWL sent me a picture of a gun after I called her with questions and she denied even being in Durban on Thursday and even seeing Zuma. pic.twitter.com/eyAby3Qwuf

Matuba accused the journalists of “peddling lies” and said Hunter was “becoming an embodiment of gutter journalism”. Matuba has denied any knowledge of the threats and claimed she shared the cellphone with many people, reported the IOL.

Meanwhile, The African National Congress (ANC) has requested that the publication, The Sunday Times, withdraw the article which says senior party members are planning to remove President Cyril Ramaphosa.

The paper said the first action from the group was a letter sent to Magashule on Wednesday from regional executive committees in the North West, challenging the ANC’s highest decision-making body for its decision to disband the Mahumapelo-led provincial executive committee. It is alleged that the group has opted to challenge Ramaphosa’s election through legal means after realising that “they have been politically weakened”.

ANC spokesperson Pule Mabe says, “The ANC calls on its members and the public at large not to be misled by this baseless story. We’re disappointed that the Sunday Times in a very irresponsible and dangerous manner proceeded to publish this misleading story. We urge the Sunday Times to immediately retract the story, which is nothing but incoherent political gossip.”

The African National Congress Youth League's (ANCYL) Provincial Secretary in KwaZulu-Natal, Thanduxolo Sabelo is also seen in pictures attending the meeting.
But Sabelo says there is absolutely no truth to the reports.

“I have taken up the matter with the press ombudsman to say that the Sunday Times has written a false story which seeks to defame me and to cast aspersions on my character. I will demand an apology with immediate effect.”

Sabelo admits that he saw Magashule at the hotel but not for the reasons claimed by the Sunday Times.

“I saw the SG. He was outside the hotel not even inside. Outside the hotel packing his bag inside the car, so I went there to greet him we barely spent five minutes together there and I had to rush back to a PWC meeting which was taking place in the provincial office of the ANC.”

Sabelo says he has a good relationship with President Cyril Ramaphosa.

“I have no problem with the current president of the ANC. Indeed we have a very good working relationship.”

“The alleged clandestine plot‚ which regrettably includes the SG [secretary-general] comrade Ace Magashule‚ undermines the unity and renewal efforts of the ANC‚” he tweeted on Sunday.