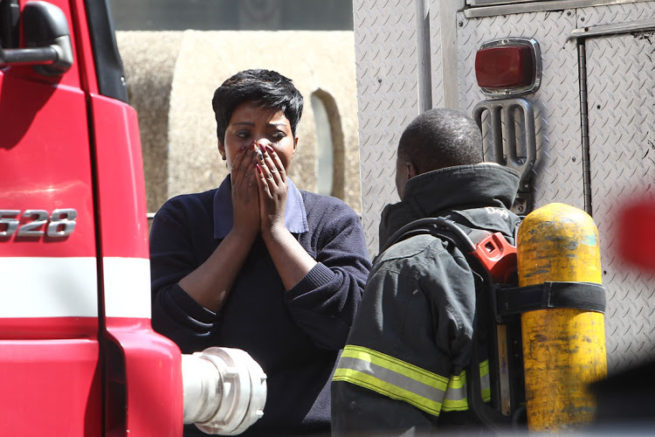 A terrified Johannesburg government worker has described the fear she and her colleagues encountered when their offices caught alight on Wednesday.

The financial clerk‚ who cannot be named because she was not authorised to talk to the media‚ said employees ran for their lives.

“No one knew what was happening. It was terrifying. It's still very scary. We were afraid for the people who were still stuck inside‚” she said.

The woman described how the situation was worsening‚ with ambulances constantly arriving. She said she understood that the fire broke out in offices which housed the department's legal services‚ including the chief financial officer's office.

"The fire was not going out‚” she said.

Three firefighters were confirmed dead in the blaze. One of the dead firefighters fell to his death. The blaze broke out on the 23rd floor of the CBD building‚ which houses the Gauteng health and housing departments‚ as well as offices of the cooperative governance and traditional affairs department.

Several other firefighters and civilians were reportedly trapped on a tiny ledge of the building‚ with some civilians trapped on the roof.

A health department employee said he had been in his office when he heard an explosion. He then heard people screaming‚ "Fire! Fire!"

"I didn’t know what was happening. I ran out of my office into the passage. People were trying to go down the lifts while others were running down the stairs to try and escape. I ran down the stairs as fast I could. When I got outside the building was covered in thick black smoke‚” he said.

Another eyewitness has described the moments before another firefighter fell to his death from the burning Jo'burg building.

“He was trying to break the window. He went first‚ and then he went for the second time and then the window fell out with him.”

This is how eyewitness Mandla Ngcobo on Wednesday described what happened in the seconds leading up to the death of a Johannesburg firefighter who fell from the 23rd floor of a burning building.

Ngcobo was standing outside the building‚ watching as the terrifying scene played out above his head.

From where he was standing‚ Ngocbo said it appeared that the firefighter had tried to use his body weight to break the window and get to a ledge outside.

“I think he went with the elbow first time‚ and then he went for the second time‚ [then] he went full force with his body‚” said Ngcobo.

Ngcobo described the moments immediately after the man’s body hit the ground.

“One of the paramedics…when she went there [to the body] she just dropped everything and just ran away crying‚” he said.

Ngcobo described the scene as “horrible”.

“You can imagine from the 23rd floor… It’s traumatising. Everyone is traumatised‚” he said.

Meanwhile, City of Johannesburg MMC for Safety Michael Sun says flames at the Lisbon Building were fueled by papers.

Johannesburg emergency services are monitoring some of the 'hotspots 'at the building.

Speaking on Weekend Breakfast, Sun says there was no water in some of the floors.

“The feedback we got from the firefighters was that there was no waters on some of the floors and some floors the water pressure was low.”

Mayor Herman Mashaba says there are several dangerous buildings in the inner city.