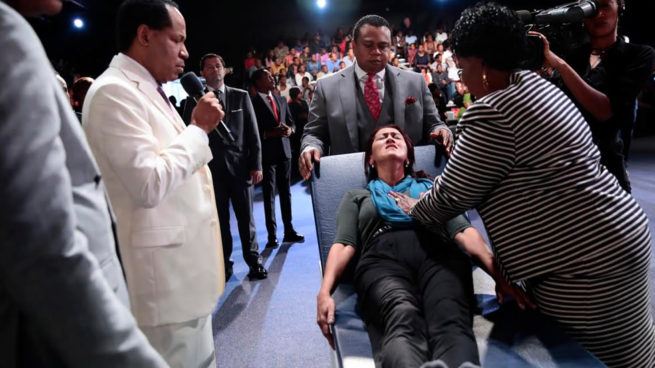 Popular Nigerian pastor and head of Believers World, Pastor Chris Oyakhilome has yet again been involved in another controversy.

This time, the pastor has been accused by a member of his own church of faking miracle-healing sessions.

According to a report by South Africa’s Sowetan, followers have said that he has been hiring people to pretend to be sick and disabled and then “be healed” during his television shows and public prayer meetings. “I was offered R10 000 to rehearse and pretend to be in a wheelchair three weeks before the all-night prayer called Night of Bliss at the Johannesburg Stadium,” the newspaper quoted a member of the church.

“The pastor told me that they were looking for people to work for the church. He said that I was going to sit in a wheelchair and be wheeled around while pretending to be physically ill. I would then stand up and walk as soon as Pastor Chris stopped praying for me. “Even children who are healthy are whisked around in wheelchairs. Some use crutches.

Everyone is allocated a person who tells the congregation about your background, your specific illness and suffering. “The pastor then raises his hands and places them maybe on your legs if you cannot walk, and a few seconds later you get up and walk around the room,” the source said. He claimed he called the church the day after their offer and turned them down.

“I just told myself that using the word of God to lie to desperate people is immoral, so I refused to take up their offer.” Also speaking about the pay-for-miracle, another worshiper of the church, said: “When he started healing people, I did not see him call anyone from the audience.

The people that he ‘healed’ came from a certain section of the audience and it looked like he came with them especially for the event. “I saw a lot of people in wheelchairs leaving the venue who had not been healed. It was very sad.” Recall that pastor Chris and his wife Anita publicly filed for divorce, citing irreconcilable differences.