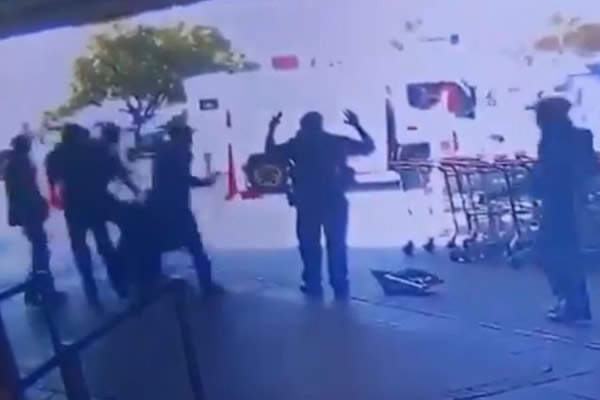 A suspected robber was shot dead following a cash-in-transit heist in Florida, west of Johannesburg, on Friday.

Earlier on Friday, a security guard was confronted and robbed of an undisclosed amount of cash and his firearm by two armed men while he was collecting money at a service station.

"Suspects shot a tyre of the CIT (cash-in-transit) vehicle before fleeing. At least four suspects are reported to have fled from the scene in a light delivery vehicle. The suspect vehicle was immediately circulated," read a statement from the Ministry of Police.

"A short while later the suspect's getaway vehicle was spotted in Dobsonville by metro police, which resulted in a high-speed chase and a shootout. A local SAPS (South African Police Service) vehicle which was also patrolling the area assisted the metro police officers."

One suspect was shot dead during the shootout with police and an AK-47 and three pistols were recovered. The other three suspects escaped, however, investigations are underway to track them down.

Two bystanders were also injured in the shootout. ER24 spokesperson Russel Meiring said when paramedics arrived on the scene, provincial services were attending to the injured man and woman.

"Upon closer inspection, paramedics found that a man and woman had both sustained gunshot wounds and were in a serious condition," he said.

"Paramedics treated the patients and thereafter transported them to nearby hospitals for further treatment."

"The swift action of police is now the business of the day, we cannot co-govern with criminals," Cele said.

"Nothing will distract or divert our attention from creating a safe and secure environment."

National Police Commissioner General Khehla Sitole praised both the SAPS and the metro police officers for their vigilance and bravery.

"The positive response by our police officers nationally to these violent crimes since the implementation of the national interventions must be applauded," Sitole said.