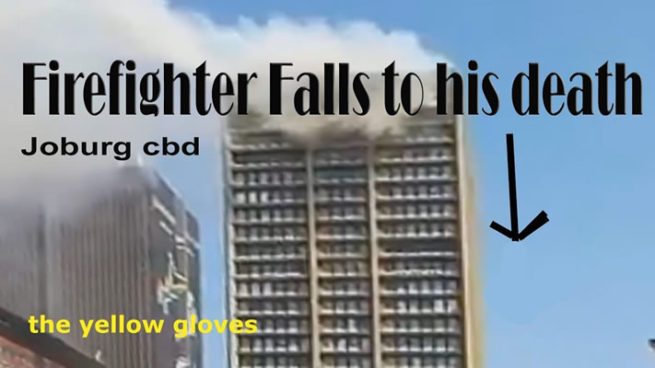 A young couple sharing their happy snaps with their two children: That’s the memory shared by a woman who saw her life torn apart when her firefighter husband lost his life in Johannesburg’s city centre on Wednesday.

Altogether three firefighters died in the blaze that engulfed the building on Wednesday, and while they have not been officially named as yet, Yuri Tseke shared her heartbreak publicly.

“#JoburgFire today I lost my husband, my best friend, father to my children. I love u so much.”

#JoburgFire today I lost my husband, my best friend, father to my children. I love u so much pic.twitter.com/FEbLONGJdJ

City of Johannesburg mayor Herman Mashaba has saluted the bravery of the firefighting team and has pledged that the families of those who died will be supported. He is also planning the visit those admitted to hospital for treatment on Thursday.

And she has started a crowdfunding campaign, asking for donations to help pay for her children’s education. They are a toddler and a baby in arms.

Officials ignored ‘death trap’ warnings at a government building in Joburg – and three firefighters paid with their lives because of it.

The slow reaction to complaints from workers and a departmental study, both emphasising the poor safety conditions of the Gauteng provincial department of health offices, led to three deaths yesterday.

Three firefighters died and 13 employees of the Gauteng department of health have been admitted to hospital for smoke inhalation following a raging blaze on the upper floors of the building in the Johannesburg CBD.

One of the firefighters died after falling from the upper floors of the 23-storey building at about 11am following an explosion in one of the offices.

Democratic Nursing Organisation of South Africa’s (Denosa) provincial chairperson Simphiwe Gada said: “Gauteng health and infrastructure must take the blame for these deaths as they could have been avoided if they took the safety of the employees seriously.

“As recently as Friday, organised labour warned the employer on this urgent matter at the multilateral meeting where we asked to be the issued with the occupational health and safety certificate of the building. This was because the department had reneged on an earlier commitment to move all employees working at the provincial department of health to a safer building.”

He also said the fire only breaking out on the 23rd floor was highly suspicious, because that is where the provincial government’s law department, which was conducting an investigation on corruption, was located.