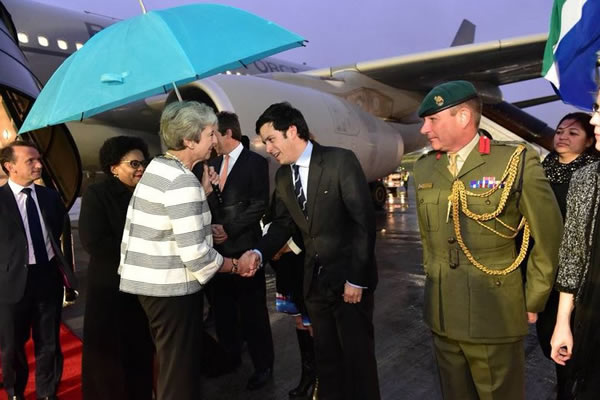 British Prime Minister Theresa May arrived in Cape Town on Tuesday morning for her one-day working visit to South Africa.

May, who is being hosted by President Cyril Ramaphosa, was accompanied by about two dozen British business people.

“The working visit follows bilateral meetings between President Ramaphosa and Prime Minister May during the Commonwealth Heads of Government Meeting (CHOGM) in London from 19 to 20 April 2018 and at the G7 in Canada on 8 to 9 June 2018,” said the Presidency in a statement on Monday.

“During the bilateral engagements, the two leaders discussed potential partnerships between the United Kingdom and South Africa and efforts to strengthen bilateral trade and investment relations.”

The visit by the prime minister of the United Kingdom of Great Britain and Northern Ireland seeks to further cement economic relations with SA, built up over several decades.

May is unlikely to speak publicly against land expropriation as she makes her first state visit to South Africa – but she may ask for an explanation, an expert says.

May is the first British head of state to visit the country since Tony Blair in 2012. She is currently on a tour of three African states, including Kenya and Nigeria, joined by several ministers and 29 business representatives.

While the governments of Australia and the United States have taken official positions on South Africa’s land issues, the United Kingdom is likely to take a more diplomatic approach on the surface.

This, however, did not mean that South Africa’s former colonisers were sold on the expropriation of land without compensation, said political analyst Tshepo Tselapedi.

“Part of the problem is the nexus of a powerful white minority with established economic ties with places such as the UK, and the network runs deep.

“There is a lot of paranoia at the moment against the policy of expropriation, even though there has been no modality that has been put on the table.

“There needs to be some sort of communication from us to the UK. But, remember, government can’t have a position on the matter as we are still going through public hearings and other processes.

“The ANC only took a position on the broader discussion of the proposal and the modalities that they have looked at.”

The biggest problem South Africa was likely to face was the possible violation of bilateral or multilateral trade agreements which were binding on certain political and economic issues, such as private property rights, Tselapedi pointed out. But this did not mean that there were no modalities for expropriation that could work around that.

“There are countries out there that have found expropriation modalities that work for them, such as New Zealand, where they would expropriate and not give cash.

“Instead, they give something like shares in a parastatal or a government bond which the recipient is able to cash out in about 20 years.

“So there are so many modalities that can be looked into that are not being discussed.”