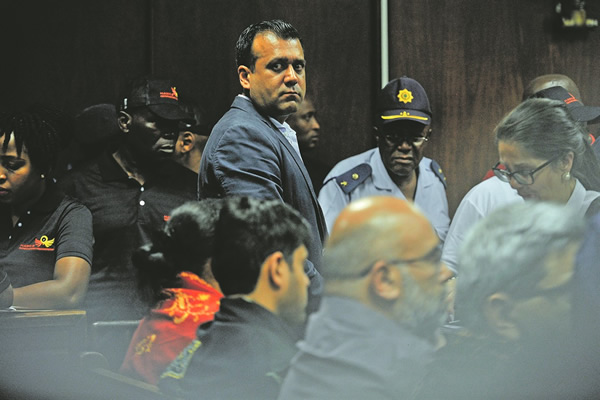 President Cyril Ramaphosa could soon be calling his counterparts in Dubai and India for help to get the Gupta family and their lieutenants behind bars.

So frustrated are prosecutors at the slow process of submitting their requests for mutual legal assistance from those governments that the National Prosecuting Authority (NPA) is now considering asking Ramaphosa to directly engage Sheikh Khalifa bin Zayed al Nahyan of the United Arab Emirates (UAE), and India's Prime Minister Narendra Modi to seek their intervention.

City Press has also reported that:

– The two state capture cases now before court – the Estina matter, involving the alleged looting of R250m from the Free State department of agriculture through the Vrede dairy farm project; and the corruption case against Duduzane Zuma for his role in the Guptas' alleged R600m bribe offer to former deputy finance minister Mcebisi Jonas – are in shambles. Prosecutors are now said to be blaming former National Director of Public Prosecutions Shaun Abrahams for pushing them to bring the cases to court before they were ready;

– Officials from the NPA, the Hawks and the Asset Forfeiture Unit (AFU) held two meetings with evidence leaders from the commission of inquiry into state capture, headed by Deputy Chief Justice Raymond Zondo, who suggested they take the lead in the inquiry because they have much better investigative and forensic capacity than the Hawks do;

– After the commission provides the NPA with its report – which could take more than two years – prosecutors would then decide what action to take.

This means that it could be years before any alleged role-players in state capture, including the Gupta brothers, former Transnet and Eskom chief executive Brian Molefe, his chief financial officer Anoj Singh, and Gupta lieutenant Salim Essa – who have been identified in a number of forensic reports – ever see the inside of a court room; and

– While the terms of reference of the commission do not allow for evidence gathered there to be used in criminal cases, the AFU will be represented and will launch civil applications to preserve the assets of alleged wrongdoers as and when that evidence becomes available.

Meanwhile, on Tuesday, the NPA narrowly averted an embarrassing failure in the commercial crimes court in Bloemfontein when the court took some convincing to allow for the case against the Estina accused to be postponed to December 4.

Prosecutor Justice Bakamela asked for a three- to six-month postponement to allow for further investigation and the finalisation of the mutual legal assistance applications.

He presented the court with a letter from the department of justice, confirming it was in the process of finalising the applications with authorities in Dubai and India.

However, two senior prosecutors told City Press that the NPA had compiled three such applications for assistance for that particular case, but only one had left the country – despite the fact that the accused appeared in court in February and the Hawks have been investigating the case for almost a year.

The only application sent so far has been to India.

One senior prosecutor said they had requested information from both countries, including details of bank accounts held by the "Guptas and their associates", bank statements and a detailed list of transactions for forensic analysis.

They also asked for the police in both countries to obtain statements from members of the family, as well as their lieutenants and any other witnesses in both Dubai and India, on their behalf.

"In the case of the two applications that have to be sent to Dubai, we are still in the process of getting the requests to be translated into Arabic. It is a tedious process," said one prosecutor privy to the details.

ASK PRESIDENT TO ASK FOR HELP

"If all fails, the idea is to request that President Cyril Ramaphosa ask his counterparts in the UAE and India for help before the next court appearance."

Advocate Mike Hellens SC, who is representing three of the accused in the Estina case – former Sahara executive Ashu Chawla, Oakbay chief executive Ronica Ragavan and the Gupta brothers' nephew, Varun Gupta – opposed the postponement application, saying it was "outrageous" for the state to seek further breathing space to finalise its investigation, especially because the accused had already been arrested.

Another prosecutor privy to the details said the prosecutors involved in the case had blamed Abrahams for rushing them to effect the arrests.

Abrahams has, in the past, denied having interfered with the work of the prosecutors in the state of capture investigation.

"The case is just a mess," said another prosecutor.

"There was no proper cooperation between prosecutors and the Hawks as they were busy pointing fingers at each other. All the forensic work has been outsourced to private firms and the Hawks have no control of the time frames."

MEETINGS WITH THE COMMISSION

Meanwhile, City Press has learnt through two senior officials that the Estina and the Jonas investigations had hit major snags.

The Jonas case, said one prosecutor, was in trouble because "Jonas cannot say conclusively which Gupta brother had offered him the bribe", and no identity parade had been arranged which was a major stumbling block.

Jonas testified before the commission of inquiry on Friday that one of the Gupta brothers had threatened to have him killed if he revealed any details about the meeting in which the bribe was allegedly offered.

"The position by evidence leaders was that, because they have more resources, they could proceed with the hearing and narrow down the issues to make it easy for the criminal investigation," said a senior prosecutor.

"However, the issue was that this could delay criminal prosecutions for over two years that the commission will be conducting its hearings."

Evidence leaders, the official said, were also of the view that "because the witnesses appearing before the commission would also be called to testify in a trial, it would be ideal if the state would wait for the commission to proceed first … before [prosecutors] could enrol the matter before court."

No decision on this had yet been taken, however.

"Most of the forensic investigations into the state of capture are already outsourced to outside firms due to lack of skills with the Hawks," the official said.

"We have, however, agreed that the asset forfeiture process should take place as soon as the commission finds any assets that need to be preserved while the hearings continue."

The prosecutor added that it was agreed that the AFU should be represented at the commission throughout the proceedings to keep the NPA leadership abreast of developments in the inquiry.

However, the AFU has suffered embarrassing failures this year – including the Bloemfontein High Court's overturning of an order to preserve R250 million of the Guptas' assets because the evidence before it was insufficient to secure a successful prosecution in the case.

NPA spokesperson Luvuyo Mfaku was unavailable for comment by the time of going to print.