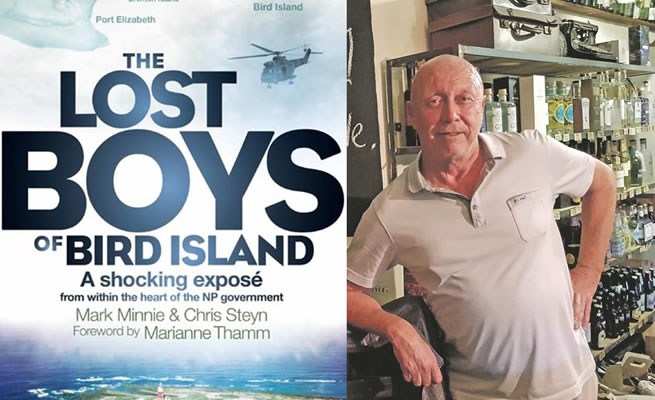 Mark Minnie, the co-author of The Lost Boys of Bird Island, alleged to have committed suicide, is believed to have addressed his co-author Chris Steyn in an apparent suicide note.

In what Minnie called his “last piece of writing,” he told his friend and co-author that he was tired and “looking forward to eternal rest”, according to a statement issued by Tafelberg Publishers on behalf of Steyn.

Minnie also urged Steyn to continue with the work they were doing.

“The pitiful cries of the lost boys of Bird Island have haunted me for the past 31 years. At last their story is out. Chrissy‚ don’t give up now. You are almost home. No government officials preventing you from investigating this time round,” he said.

According to Tafelberg Publishers, the rest of the note is addressed to Minnie’s family.

Steyn, in the statement, included a moving response to the late author’s letter.

“Mark‚ I will keep going. You knew that. I just wish you could have been here to go through all the new leads with me. If only you were still alive to see all the information and incredible confirmation that has come in since the book was published. You would have felt some vindication at last.

“But I have good news‚ Mark. There is already enough to start building a new docket. Once we are ready‚ we will hand it over for further action. That was all you ever wanted. A proper investigation. But you don’t have to worry about it anymore. And nobody is going to steal this docket. Chrissy,” she said.

Not everyone believes Minnie’s death was a suicide.

Last week a relative and long time family friend of Minnie, Tersia Dodo, told the SABC on Wednesday that she did not believe Minnie committed suicide, saying his life was in danger and that she believed the suicide note found at the scene either to be false or not exist at all.

She was allegedly told by Minnie not to believe it if he was reported to have committed suicide.

"They are in the background. I know there is a plot to take me out… If anything happens to me, don't believe a word when you hear it's suicide." Mark Minnie apparently told his childhood friend and family member Tersia Dodo last week.#markminnie #birdisland #MagnusMalan

“My reaction was that it was definitely not a suicide, and it’s the same reaction that we all have had,” she said of Minnie’s family.

“This supposed suicide note was either written under duress [or forged], and I would like to see it before I will believe that it was written by Mark.”

Later in the interview, Dodo mentioned that the alleged suicide note had not been seen by anyone other than the police.

“I don’t believe that a suicide note exists at this stage. I spoke to a couple of my cousins today, and to all of them, he expressed that his life was in danger, and that if anything did happen to him, we must know that it was done to him, not by himself,” Dodo said.

Minnie was found last week by a friend who owns the smallholding where he was last seen alive, in the bushes near the house. He had a gunshot wound to his head. The firearm was next to the body.

Police later claimed to be in possession of a suicide note. Whether this is the same note referenced in Tafelberg’s statement is unclear.

On these “fishing excursions” by apartheid government officials, the men were always accompanied by young boys, and a book coming out today reveals why: the boys were given food and booze just before they would be sexually abused.