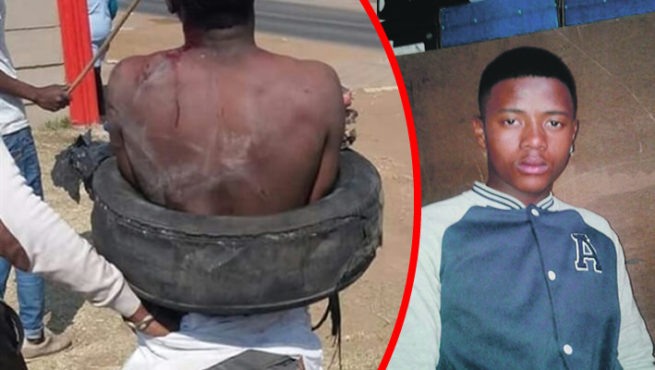 Siyanda Mjoli always evaded or denied his mother Nolwazi’s pointed questioning of whether he was part of a gang.

But she had her suspicions.

Even when he appeared in the Benoni Magistrates’ Court last year for being involved in an apparent gang-related fight with a rival member of the Avanza gang against his crew – the Freaks – he still denied his involvement to her.

But, because he was still a minor, that case was referred to a social worker and subsequently dismissed.

But on Wednesday when the 39-year-old mother received frantic word from a youngster in her neighbourhood in Daveyton that Siyanda had been set alight at grounds near the Unity Secondary School and was crying out for her, she had no time to brace herself for the sight she was about to see.

“I got to the grounds and found him lying there … his whole body black and burnt. The police were already there but they weren’t the ones who put out the fire burning his body; he did so himself by rolling around the grass,” she told City Press yesterday.

Siyanda, who turns 18 next month, is a Grade 7 pupil at Ntsikana Primary School in Daveyton.

He was necklaced last week by angry community members who accused him of being part of a crew terrorising Daveyton, murdering and raping men and women and cutting off their private parts.

His necklacing was reminiscent of the 2008 xenophobic attacks and with the image, immortalised as “The burning man”, of then 35-year-old Mozambique national Ernesto Nhamuave, who was beaten, stabbed and set alight at the Ramaphosa informal settlement.

Fortunately for Siyanda, he survived – Nhamuave wasn’t so lucky.

Siyanda recounted the events leading to his necklacing on Wednesday to his mother from his bed in the Far East Rand Hospital in Springs.

He said he was on the way to school when he got a call from a friend warning him not to walk outside because the community had ganged up and were looking for him.

“He said as he was turning back – in a street passage towards the school called eziBisini – there was already a group turning the corner into the passage. Siyanda’s crew are known for wearing beanies with the pompoms on top, so the guys snatched them asking where the rest of the members were,” Nolwazi said.

She said Siyanda was walking with another friend who wasn’t wearing a beanie that day and was let go after he denied being part of a gang.

“Siyanda said the pack first started hitting him … then dragged him around the streets looking for paraffin. They didn’t find paraffin and that’s when they took him to Unity school to get him to point out the rest of his friends involved in the gang,” Nolwazi said.

She said she didn’t know why her son was burnt.

“I was called in afterwards … when he had already been burnt. What can I say? We grow and go through hurtful things …” she said, visibly emotional.

Nolwazi said she hadn’t been victimised in the community since the attack and no one had said anything to her.

No one had questioned her. She wants to know who set fire to her son and why no one had called the police. She still wonders why those involved used such extreme and harsh measures.

During the interview at her sister’s backroom in a different area from her own home in Daveyton, she received a few phone calls from loved ones reaching out to her in support.

“Kuzolunga …” she said softly in one call.

“We’re fortunate that this happened in an open area, maybe that’s why he survived. I just pray he gets better so he can go back home to Umzimkhulu in KwaZulu-Natal because, if he comes back here, the community will still be after him,” she said.

On Saturday, several police cars were seen slowly patrolling the township streets, still on high alert after Friday’s social media warning of a “blood bath” in the area in retaliation by the gangsters.

Gauteng community safety MEC Sizakele Nkosi-Malobane confirmed that three people had been arrested in connection with the mob attack and that more arrests were likely.

“We strongly condemn the disruption of schooling and urge the community to remain calm and allow the law to take its course. Schools are centres of teaching and learning, they should be treated as such,” he said.

A resident of the area around the school, who asked to remain anonymous, said: “What sparked the violence was the killing of a man in a section called Yende. He was walking out of a tavern when he was attacked and his private parts cut off.

“About three weeks ago a woman was attacked and her breasts cut off … We’re really not living well in this area. It’s these evil, dirty small kids who belong in groups. Bheki Cele needs to intervene here and place police in each section because we really aren’t safe. Ku nini ku khalwa? [We’ve been crying for so long].”