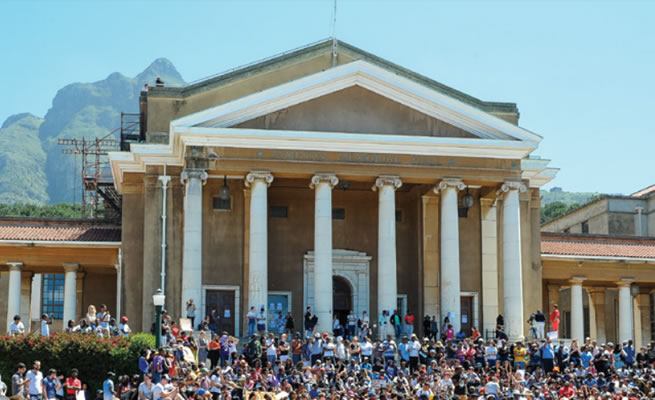 A University of Cape Town (UCT) lecturer has been suspended after he allegedly posted on social media his thoughts about raping and killing his two-year-old daughter.

UCT spokesperson Elijah Moholola said they were deeply disturbed by the content of the post and had taken “urgent and immediate steps to pursue a suspension against its staff member”.

It all begun when the mechanical engineering lecturer apparently insulted women on Facebook in a post against #MenAreTrash on Tuesday.

The man is also a member of the Khayelitsha Engineering Society, which promotes engineering as a career of choice in disadvantaged communities.

His post read: “Ladies we gonna have to get some things right here. This men are trash bullsh*t must stop here now. It was not me who did not teach you how to attract and retain a quality man.

“It was not me who said open your legs to a f*&k boy. Neither was it me who said ignore the nerd at your school. I was not there when your mom attracted your trash dad. For some of you trash attraction runs in the family. Learn your history, check is it not (sic) your linage to attract trash, slaughter a goat sisi wam.”

A Nombongo Mabentsela responded, saying: “U referring to one type of trash … When I say men are trash I’m referring to those that sexually abuse women and children… a six month and 65 yr old do not attract such animals, a first yr student walking on campus does not invite rape or to be mugged!!! So those men that commit such are trash (sic).”

And what is believed to have been the lecturer’s response was more shocking.

“Some of those men are suffering from depression some of those men are deeply scared to the extent that they do these acts. Nono when I was depressed I had thoughts of raping my own 2 yr old daughter. I wanted to kill her. I saw nothing in her. There was no love (sic),” the post reads.

When contacted by Sowetan for comm ent yesterday, the lecturer said: “I just do not wish to comment on this point in time sisi wam. Can you please respect that.”

The posts have since been removed from his Facebook page.

Moholola said the lecturer had been stopped from teaching. “UCT confirms that despite claims to the contrary, the staff member has been informed of the formal process to suspend him.

“The content of the post is grave, unacceptable and disturbing and completely out of alignment with UCT values. The university is dealing with the matter urgently by following the appropriate employee-relations legislation and the UCT Human Resources policies,” he said.

Asked whether the lecturer’s account could have been hacked, Moholola said: “He will get to explain everything during his hearing. The institution was made aware of the social media post made by a university staff member on his personal Facebook page.”