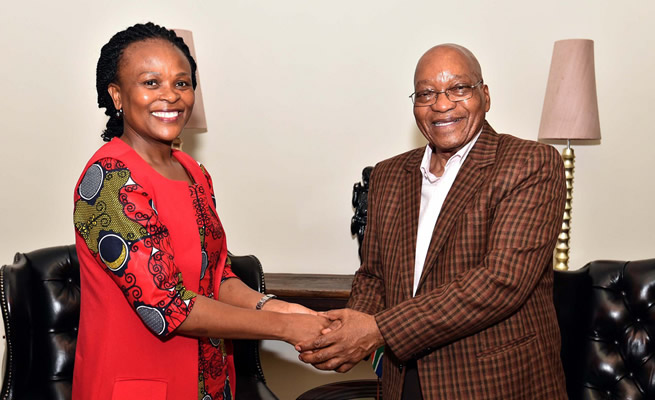 The South African Reserve Bank’s lawyer, Johannes de Jager, has filed an affidavit alleging that Busisiwe Mkhwebane lied to the Constitutional Court under oath and used public funds to fight her personal legal battles, according to The Sunday Independent.

The affidavit claims that Mkhwebane made “further fake statements under oath” while attempting to defend herself against challenges to her controversial investigation into the R3.2 billion bailout the central bank gave Bankorp between 1986 and 1995.

In court papers, Mkhwebane claims she “mistakenly referred” to a meeting with ex-President Jacob Zuma, a claim that De Jager dismissed as “disingenuous.”

While Mkhwebane blamed the “mistake” on the hurried time frame in which her affidavit to the high court was prepared, De Jager claims she had more than two months, and accuses the public protector of falsely claiming the meeting was about something that it was proven to not have been about.

He noted that Mkhwebane had tried to distance herself from the affidavit due to its false account of her “meet and greet” with Zuma.

According to De Jager, the public protector has “compounded” her legal problems by misrepresenting facts and disclosing documents that should have been submitted during the case in the high court.

“Mkhwebane fails to provide any basis at all to question the damning findings against her”, according to De Jager.

De Jager has also accused Mkhwebane of paying for her legal battle with public funds.

The public protector’s report into alleged an illegal bailout given to Bankorp by the state was reviewed and set aside by the high court.

CIEX, an intelligence company hired by government to investigate the bailout, found that Bankorp had received an illegal gift of R3.2 billion, but Mkhwebane found the figure to be closer to R1.225 billion.

The matter is set to be heard in November. The public protector was granted direct access to the ConCourt on Monday after putting in an application requesting this.