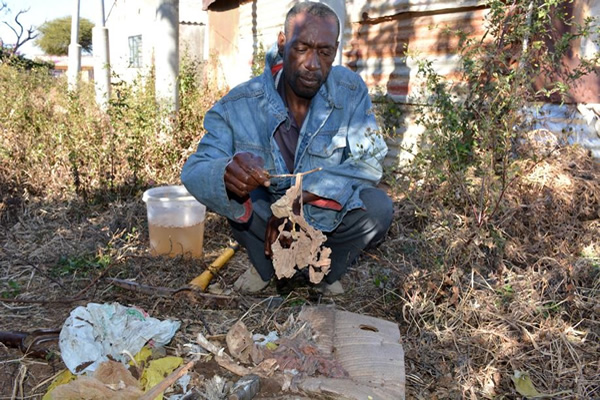 For five years Kagiso was a drunkard and a mess. No woman wanted to stay with him, his friends didn’t visit his filthy place and his family feared he was losing his mind.

But the mystery has been solved. Now the curse that had been haunting Kagiso Molekwa (46) is no more. A prophet dug up what looked like a G-string, bottles with muthi and animal bones that had been hidden in his yard in zone 1, GaRankuwa, Tshwane.

This is after Kagiso’s nephew saw a story in newspaper about a prophet helping another family. They tracked down the prophet and called on him to use his powers to intervene.

The prophet told Kagiso the things found in his yard were causing him bad luck. Kagiso said he had been suffering for five years.

“I couldn’t ever keep a woman by my side. A fight would start and the woman would be no more. All I did was drink away my sorrows every day and I stopped cleaning my place. Even my friends stopped visiting,” he said.

He said his tenant died mysteriously in the yard last year and he couldn’t work anymore.

“When I tried to clean the yard my right shoulder became swollen.”

Kagiso said he didn’t even sleep in the house as he believed something was haunting him.

“When I tried to sleep I heard disturbing sounds so I slept at other people’s homes.”

Kagiso’s nephew, Oupa Molekwa (41), told the People’s Paper they found the prophet they had seen in the article.

“Before we could even tell him about our problems he told us everything that had happened and said there was muthi buried in the yard.”

He said the prophet led them straight to a spot in Kagiso’s yard where he unearthed the woman’s underwear, small bottles of muthi and animal bones.

“It was clear that these things had been buried in my yard a long time ago.”

He said they would wait and see if there were changes after the prophet’s ritual.

Oupa said: “I’m ready to move in with my uncle and stop renting.”

Prophet Jacob confirmed he had dug up muthi at the Mokoena home.

“The muthi was buried many years ago,” he said.

He said whoever buried those things wanted bad things to happen to Kagiso.