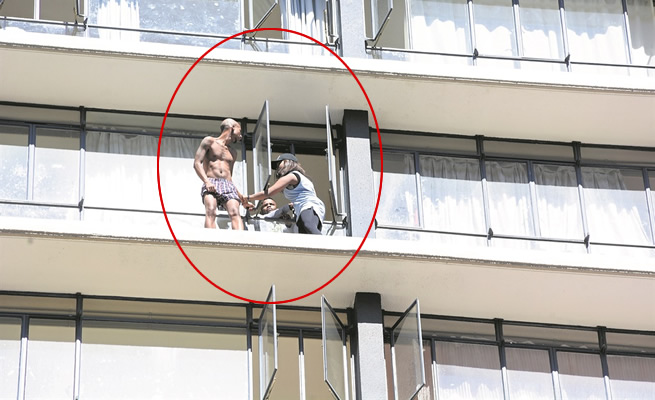 IT’S nice to be in love. But a man almost ended his life by jumping off a building on Sunday afternoon.

A man living at Nedbank Plaza in Tshwane with his girlfriend became angry when she allegedly told him their love must end.

This was apparently because he was no longer delivering what a man is supposed to in bed. Being told that he was now performing extremely horrible during sex didn't go down too well with the heart-broken man that he decided to meet his creator.

People who saw the incident told Daily Sun that the man, who is believed to be in his 30s and not working, was angry that his girlfriend did not want him anymore.

They said the woman brought him to Tshwane from Limpopo, but he disappointed his lover.

The woman, who is also in her 30s, decided to end the relationship. The man wanted to kill himself, but his lover convinced him not to end his life.

People said the two have been living in the building for more than a year.

Richard Lunga (47) said: “The man wanted to end his life just because of a woman. I think he is not normal. Thank God he came to his senses and realised it was not the end of the world.”

Santy Carelse, spokesman for Paramedics on Call said they were called because someone was threatening to jump from the 11th floor.

“Fortunately he didn’t kill himself,” he said.

Police spokesman Captain Daniel Mavimbela said Sunnyside police management would like to commend the officers who intervened and contributed to ensuring the man did not proceed with his threat.

The matter was put to rest and no case is being investigated.