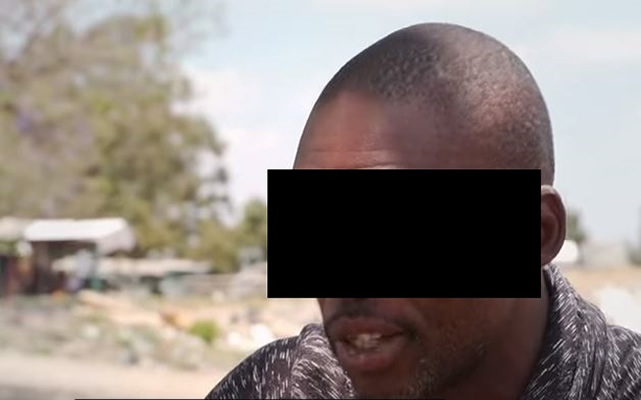 A Diepsloot man seen on a widely circulated clip saying he's an HIV positive serial rapist intent on spreading the virus was allegedly paid to say that on camera.

Allegations are that he and other people in the video were told that they were shooting a movie and told what to say and that the film would be aired overseas.

They were speaking on an international news agency's documentary and what got many South Africans shocked was when one of the people in the clip, David Kaise- says he has raped over 24 women, is HIV positive and wants to spread the disease so he doesn't die alone.


Another person in the video, identified as Portia, claims that David was her former lover who had also raped her and that she was now HIV positive.

On Monday morning, however, The Star caught up with the woman – whose real name is Ndivhuwo Ramaphalala – at Diepsloot Police Station where she had gone to lay a charge of defamation of character against the reporter who did the documentary.

Ramaphalala, a drama enthusiast, said she had been lured to make claims about the rape under false pretenses in the video. She said she was lured by the journalist in September last year and paid R200 to “act” in what was supposed to be a movie which would be aired overseas.

The reporter, she said, had also promised to buy clothes and necessities for her 11-year-old child if she “performed” in the short film.

The 27 year old woman said everything she said in that video was scripted and her life was now ruined because of it.

“My friend showed me the video last week Tuesday and now every time I go out in the streets, people ask me about it and my boyfriend also dumped me. People look at me like I’m dirty… My life is just a mess,” she said.

Ramaphalala said this was was not the first time the reporter had ripped her off. She said they met in 2010 at the community hall where she acts. She said he promised to get sponsors to fund her acting career if she did a video for him where she acts as a Zimbabwean immigrant speaking about challenges immigrants faced in South Africa.

We also went to David's house to verify if it was indeed true that he was paid to lie about being an HIV serial rapist who was intent on infecting as many women as he could. He was, however, not there but a relative of his who declined to be identified confirmed he was paid R300 to "act" in the film. The woman said David was a good man.

“You can even ask the neighbours about him, he is a good person. But it’s gonna sound like I’m speaking good about him because we are related. He wouldn’t harm a fly,” she said.

The Star could also not get hold of David on the phone as the relative said he was working in Magalies and did not have one.

Diepsloot police spokesperson Captain Tinyiko Mathebula said she also saw the video but that there has not been a single complaint against David nor was there a serial rapist operating in the area.

We also went to the journalist's house in Diepsloot but people at the house said they had not seen him since last week. We also tried to get hold of him through his cellphone, Facebook and Linkedin but was unsuccessful.

At the time of publishing the story, the news channel had not responded to questions from The Star.