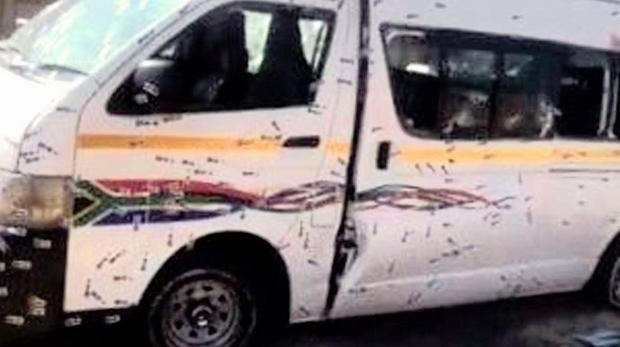 The Ivory Park Taxi Association on Monday, condemned the attack on a taxi that killed 11 people, saying the drivers may have been shot by mistake.

“We still don’t understand why their drivers were ambushed,” the association’s Johannes Mkhonza said, adding that they were not in conflict with any other association even though the shooting appears to have been planned.

Eleven people were shot dead when unknown assailants opened fire on the minibus taxi they were travelling in near Colenso in the KwaZulu-Natal midlands on Saturday night. More than 255 bullet holes were witnessed on the Toyota Quantam taxi where only 2 people escaped unharmed while 4 were seriously injured and 11 breathed their last on th spot. They were on their way back to Gauteng from a funeral of a colleague who was among the three people gunned down in Tembisa last week.

Some of the drivers killed were from the Kempton Park Taxi Association.

Mkhonza said the deceased have not been identified by their relatives but they are hoping to hold a memorial service on Thursday.

The South African National Taxi Council (Santaco) insists that it was in control of the industry despite numerous cases of violence in the taxi sector.

“We’re in control of the industry. We don’t know what has happened. We need to also go down to the ground in order to investigate,” Santaco President Philip Taaibosch said.

Just two weeks ago, the chairperson of the Armsta taxi association Sam Budzwa was shot dead in Sandton.

Gauteng-based taxi associations leaders said that they were now fearing for their lives.

On Saturday night, KwaZulu-Natal police said a minibus taxi from Gauteng was travelling from a funeral at Ematimotolo, proceeding back to Johannesburg just before 8pm, Brigadier Jay Naicker said at the time.

“On the R74 road between Colenso and Weenen unknown persons jumped onto the road from the bushes and opened fire at the taxi. Unconfirmed information for now indicates that passengers are from a taxi association in Gauteng attending the funeral of one of their members,” he said in a statement issued late on Saturday night.

“The crime scene is still active. Detectives from the provincial task team in Durban have been dispatched to the scene. There are multiple fatalities and detectives will only be in a position to confirm the numbers once the crime scene experts have combed the scene,” Naicker said.

In a statement later, he said KwaZulu-Natal transport, community safety, and liaison MEC Mxolisi Kaunda would visit Colenso on Sunday morning where 11 people were shot dead while travelling in a minibus.