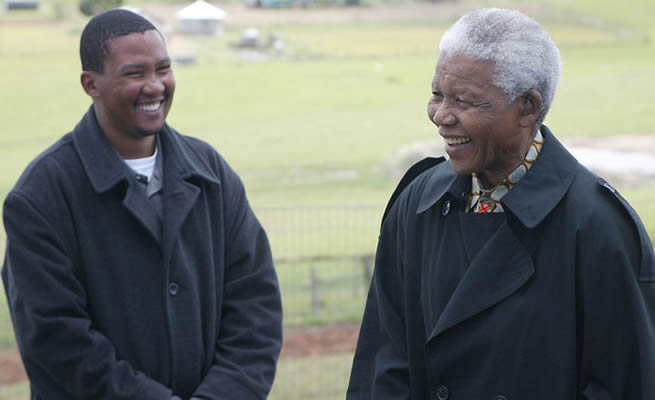 The entire Eastern Cape executive was excluded from the main event to mark Nelson Mandela’s centennial birthday, at Mvezo this week. This was after a fallout between nkosi Mandla Mandela and the provincial government over the organising of the event, which was attended by dignitaries including President Cyril Ramaphosa, former presidents Jacob Zuma and Kgalema Motlanthe.

Even premier Phumulo Masualle was not accredited for Mandla’s 500-seater dome and was only included in the programme to introduce the Ramaphosa, as protocol dictates. His name was missing from the draft programme that was presented to the inter-ministerial committee earlier this week.

“We had to insist on his inclusion as there was no way that the host premier cannot welcome the President,” said a senior government official with intimate knowledge of the episode.

The Daily Dispatch can reveal that tensions escalated to such a point that the provincial department of Public Works department had to hire a 1 000-seater tent four days before the event, a few 100 metres at main marquee.

As a result the other MECs who attended and senior government officials had to follow proceedings from the sidelines and missed some parts of the proceedings as a result of an intermittent live feed. At the centre of the fallout between Mandla and the Masualle-led cabinet is their apparent failure to commit to hosting the event – leaving the Mvezo chief to organise the event on his own.

It is understood t the first planning meeting between the Eastern Cape government and Mandla was held in January to deal with logistics of the event but nothing came of it.

The Dispatch has learnt that cabinet members, including Sport, Recreation, Arts and Culture MEC Bulelwa Tunyiswa as well as acting HoD of Public Works Mahlubandile Qwase were some of those who ended up in the “government” marquee.

“You would swear someone was cutting the feed intentionally as the cuts of the live feed were so frequent," said a senior government official who attended the event.

Others on the guest list of the secondary tent, but who did not attend, were Finance MEC Oscar Mabuyane, Health MEC Helen Sauls-August as well as Public Works MEC Pemmy Majodina.

The Dispatch has seen a copy of the invite Mandla sent to his 500 guests, which confirms that the Masualle-led provincial government was not one of the organisers.

Wednesday's celebration in Mandela’s birthplace was hosted by the Royal House of Mandel, the Mvezo Komkhulu Development Trust and the Universal Peace Federation.

Masualle’s spokesman Sonwabo Mbananga denied Masualle was given a cold shoulder. “We are not aware of that,” he said.

Mandla denied Masualle was not allowed into the dome. However he confirmed that the provincial government was not party to organising Wednesday’s event.

“We offered the provincial government the opportunity to partner in the Nelson Mandela Centennial celebration event at Mvezo. For logistical reasons we provided adequate time for them to respond and by end of business on Friday decided to proceed. We subsequently learned that the provincial government would put up a marquee as well as stage its own programme on an adjacent site in Mvezo. The event was an initiative of the Royal House of Mandela as well as Mvezo Traditional Council and sponsored by UPF without any financial contribution from government.”

Said a senior government leader who attended the Mvezon event: “…the question is, what if the provincial government did not hire that tent last Friday? The event would have been a disaster [in front of] the whole world”.

Higher education minister Naledi Pandor was also on the receiving end of Mandla's wrath when she went to open two residences for the King Sabata Dalindyebo TVET college on the day. The chief of Mvezo was unhappy with the minister opening the hostels without providing water and grading for the road leading to the residences.

Said a source in the department of Higher Education: “We had nothing to do with water and roads but he still expected us to do such. We thought we had resolved the issue only to realise he had not because he did not pitch for our event. But everything went according to our plans so his decision not to pitch at the official event for the hostels did not affect us."

This is not the first time Mandla has snubbed politicians at events organised in his grandfather's name. When Ramaphosa and members of the ANC NEC made an impromptu visit to Mandela's Qunu home earlier this year – hoping to lay wreaths at Madiba's grave – Mandla would not allow them in. He would later allow only the ANC's top six officials inside the house.

NEC members such as Lindiwe Zulu, Nomvula Mokonyane as well as Mabuyane had to remain outside the Mandela home. The Dispatch reported at the time that Mandla said he did not allow the entourage to visit Mandela's grave arguing there were still outstanding rituals of the amaDlomo clan before outsiders could be allowed near the grave.

Contacted for comment Majodina said: “With due respect I have no comments or views on Tata’s birthday held at Mvezo”.