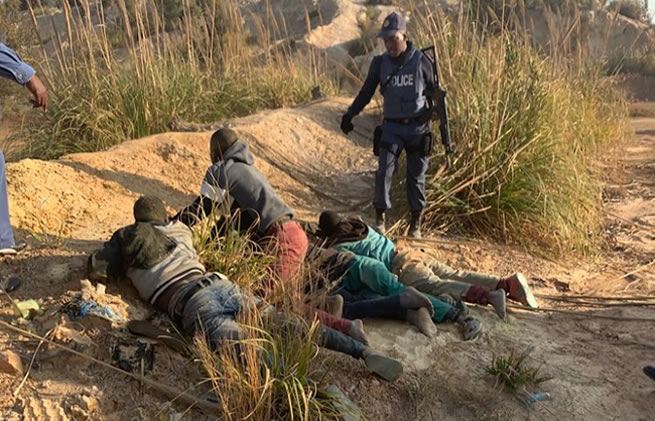 A young woman, whose modelling agency organised for some of the Krugersdorp gang-rape victims to star in the music video, has told how she offered herself to the gang in exchange for the girls' safety.

Speaking to the media, the woman said she was raped by three balaclava-clad men when she attempted to protect the girls from being attacked.

More than 80 undocumented suspects have been arrested in the past 24 hours in Krugersdorp’s West Village area. They are being held for contravening the Immigration Act.


According to the Sunday Times, the film crew was apparently shooting a music video when a gang of illegal miners, dressed in Basotho blankets, stormed the scene, firing guns.

When the victims tried to escape, they were encircled and raped one by one.

The woman who organised the models for the shoot said the girls' parents had entrusted her with their safety.

“I was blaming myself, thinking that if it hadn’t been for me, these girls wouldn’t be there. I felt responsible and I wanted to take all the pain so that they wouldn’t touch the girls.

"The young boys would then take us, one by one, to the bushes. The last time they raped me was in front of the other group,” she said.

A 19-year-old victim related how she lied to her attacker that she had suffered a miscarriage to be saved from being raped further.

She said she asked her alleged rapist to tell the others not to violate her further because she had recently lost her baby.

“I had no way out but to lie, because they were picking us up one by one. There were others who were raped by six to 10 men,” she said.

Her 21-year-old sister, who was raped in a hole, said the girls' ordeal lasted four hours.

Police minister Bheki Cele is expected to meet some of the victims at the Alexandra police station on Sunday.

He will brief the media after the closed meeting with the survivors and their families.