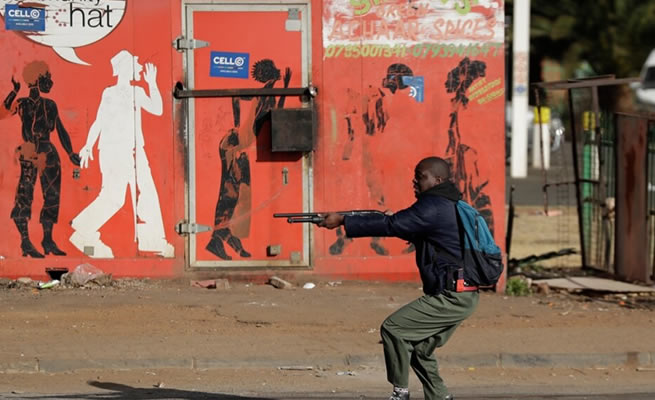 At least seven have died after another mass shooting at a tuckshop in Savannah Park in Mariannhill, KwaZulu-Natal on Saturday night.

Police say a group of gunmen emerged from the dark and started shooting. Initial investigations show that three of the victims are the tuckshop owner and his two sons. Another one of the victims was waiting at the tuckshop to see a traditional healer. Police believe he may have been the target of the hit.

A manhunt is underway for the killers.

#sapsKZN PC, Lt Gen Mkhwanazi has mobilised all available police resources to hunt down the heartless killers who murdered 6 people at a tuckshop in Marianhill earlier this evening. #CrimeStop #MySAPSApp MEhttps://t.co/yAPynEmIXw pic.twitter.com/8ooPKw8Jks

It is understood the victims were shot on Saturday evening in Savannah Park in Marianhill.

“It is alleged that at 19:30, a group of unknown men opened fire at people who were at a tuckshop in Marianhill killing six men aged between 30 and 65 years old."

One other man who sustained gunshot wounds was transported to hospital for medical attention. He is the seventh man who later succumbed to the injuries he sustained during the bizarre mass shooting.

“This incident once again demonstrates our concern that firearms are contributing to the high levels of crime in the province and we are advocating for stricter regulations regarding the management of legal firearms as many of them end up being used by criminals. We will do everything within our control to bring these killers to book,” said Mkhwanazi.

There have been a number of tavern related shootings recently. At least 39 people were gunned down in three different tavern shootings leaving up to 21 dead and 18 injured in July.

In Soweto, 23 people were shot, leaving 12 dead and 11 more injured inside the Emazulwini tavern in Orlando East, Soweto, in the early hours of 11 July.

Three of the injured subsequently died, bringing the Soweto death toll to 15.

The deceased were aged between 18 and 35 years old.

Earlier this month, two armed men stormed into the Samkelisiwe Tavern and Restaurant in Sweetwaters, Pietermaritzburg and randomly opened fire on patrons, before fleeing the scene.

The shooting left four patrons dead and eight others wounded.

In a separate incident, also in July, a group of gunmen entered the Mputlane Inn tavern in Katlehong and randomly opened fire at patrons, killing two and wounding four others.

Fifty-six-year-old James Dlamini and 29-year-old Sibusiso Hlatswayo, who lived a few metres away from the tavern, succumb to their gunshot wounds.

Gauteng police made a breakthrough and arrested one suspect in connection with the deadly tavern shooting that took place on 8 July.

President Cyril Ramaphosa expressed concern over what he described as unacceptable and worrying killings of patrons at taverns in Gauteng and KwaZulu-Natal.

In a statement issued earlier this month, Ramaphosa said government, citizens and structures of civil society must all work together, even more closely, to improve social and economic conditions in communities as well as stamping out the illicit circulation of firearms.