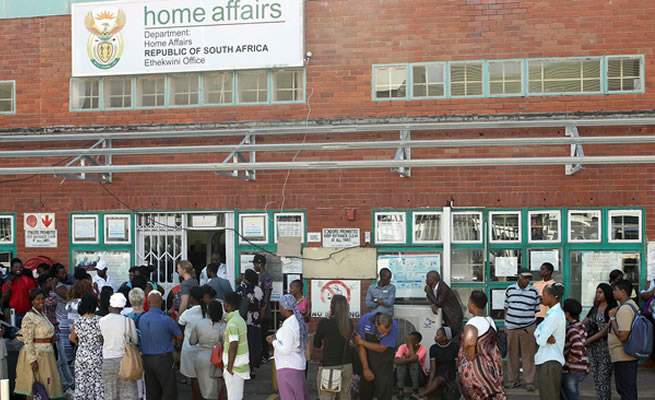 The department of home affairs has spent millions of taxpayers’ money on a contract to upgrade its population register system, but years later, the work has still not been done.

The department paid the company EOH Holdings close to R300 million in 2017 to upgrade the Home Affairs National Information System (Hanis) to the Automated Biometric Identification System (ABIS), but nothing was done.

After EOH failed to upgrade the system, the department paid another company, Idemia, which was initially subcontracted by EOH, more than R150 million to do the work, but the company also failed to do the job.


City Press reported that apart from paying for the system upgrade, the department spent more than R200 million on hardware and software, whose warrantee and licence was allegedly expiring in few weeks’ time, while it gathers dust.

Yesterday, the department said when the State Information Technology Agency (SITA) awarded EOH the contract, the department had no reason to think or suspect that the company may not have capacity to deliver on this contract.

“During the course of the forensic investigation, EOH announced that it was pulling out of all the contracts it had with the state, including this one. Because a lot of time was already lost, the department accepted the ceding of the contract to Idemia so that we don’t start from scratch because the system is urgently needed,” the department said.

The lucrative contract was awarded to EOH in 2017 by the department and the SITA, which procures ICT products and services for government departments. This after the company beat its competitors in a bidding process described as “corruption infested”. After several complaints about the tender, the department appointed a forensic auditing firm –Nexia SAB&T – to investigate the matter in 2019. Nexia SAB&T discovered that EOH and the SITA’s officials had allegedly engineered an unlawful scheme to make sure the politically connected company landed the lucrative contract.

The department yesterday confirmed the investigation.

“Because this is an IT function, in terms of the law, the department had to acquire such a service provider through the SITA. The SITA did that but unfortunately when the Auditor- General audited the SITA, it queried the manner in which the tender was awarded,” the statement said.

“Because the money to pay for this tender will come from the department, the Auditor-General instructed the department to conduct a forensic investigation.”

Responding to City Press, EOH blamed department for its failure to do the work, saying it failed to provide the company with key infrastructure and data.

Fatima Newman, Group Chief Risk Officer: EOH, said the services in question constituted the provision of both hardware and software components for the project. The deliverables and payment of fees was milestone-based, payable only against the supply of equipment and certain goals having been achieved.

In order to deliver on the project, the department had to provide to EOH certain critical infrastructure [data centres and communications infrastructure], access to government systems [interfaces] and also the data which had to be migrated from the old system on to the new system.
“These were either delayed or improperly delivered, or not delivered at all. The causes of the delay are the subject matter of arbitration proceedings between EOH and the department,” Newman said.

Insiders told City Press that Home Affairs Minister Aaron Motsoaledi met with senior officials in the department and was angry that the matter had not been resolved, and because the department was facing litigation from EOH and NEC XON, one of the companies that lost the tender bid, over the issue.

NEC XON took the matter to court, challenging the ceding of the contract by EOH to Idemia.

“He [Motsoaledi] accused the officials of dragging their feet in pursuing the matter. The minister also instructed the legal department and the heads of departments who were dealing with the matter to recover the money paid to both EOH and Idemia,” said the source.

However, the department denied the minister’s encounter with officials.

We strongly deny this. The minister regularly demands updates from the executive committee on this project because he wants the department to move to the ABIS sooner rather than later.

In the court papers seen by City Press, NEC XON cites Motsoaledi as the first respondent and the department as the second respondent. The three implicated companies are cited as respondents eight, nine and 10, respectively.

EOH, a JSE-listed group, was supposed to have upgraded the department’s current system and Hanis, which only records photos and fingerprints of South African identity document holders, to the ABIS. This would provide a single source of identification for citizens across state institutions and private sector entities. It was also supposed to allow the police to check the fingerprints of suspected criminals.

In terms of the agreement it signed with the department, EOH was supposed to have completed the work in November 2018.

The company subcontracted a French-owned company, Idemia, to implement the project, allegedly because it did not have the capacity and technical erudition to implement it.

According to sources, the company missed the deadline, disadvantaging citizens and disabling the SA Police Service, which paid part of the contract, from effectively fighting crime in South Africa.

After EOH was implicated in the much-publicised allegations of corruption, the company’s new CEO, Stephen van Coller, who was appointed to clean up the legacy and remnants of corruption that plagued it, pulled out of the contract in 2020 and ceded it to Idemia, which gloatingly parades itself as a global leader in augmented identity.

Newman said the reason Van Coller wanted out of the agreement was because “the situation of impossibility” which had arisen by late 2020 or early last year was such that it could not be resolved.

“EOH did not want to stand in the way of a resolution and agreed to an assignment [cession] of the master service agreement by the department to Idemia in April last year,” said Newman.

She said the department and EOH were currently going through arbitration regarding their historical disputes.

The SITA flagged the contract for violating procurement laws when it was ceded from EOH to Idemia with the consent of the department.

“What is funny and ironic about the cession of this contract to Idemia is that it is the very same company that failed to implement this contract. We were all shocked [by that decision],” said the source, who did not want to be named for fear of victimisation.

The department, said the source, then entered into a R150 million contract with Idemia in April last year. The company was given six months to complete the project.

The company failed to complete the upgrade on time and asked for the extension until October.

Aloma Swanepoel, of Ginjaninja PR, who responded to City Press on behalf of Idemia, said the company did not comment on its contracts. He referred all enquiries to the department of home affairs.

The source said Motsoaledi also expressed concerns about Idemia’s failure to meet the deadline. It is alleged that some officials suggested that the department should penalise EOH and Idemia for failing to meet the deadline and also recover the money it paid to EOH.

But EOH has already beaten them to the game by approaching the courts in a bid to be released from the agreement. It is also demanding the balance of R128 million with interest, as per the original contract.

Newman said EOH had successfully delivered 51 of the 60 contracted milestones for phase 1 of the project, which had been signed off and accepted by the department. “EOH only received R282 million [including VAT] in payment for services rendered,” she said.

Newman said the agreed fee for the entire project was about R410 million, which had not been paid in full. She said EOH had only been paid for certified deliverables.