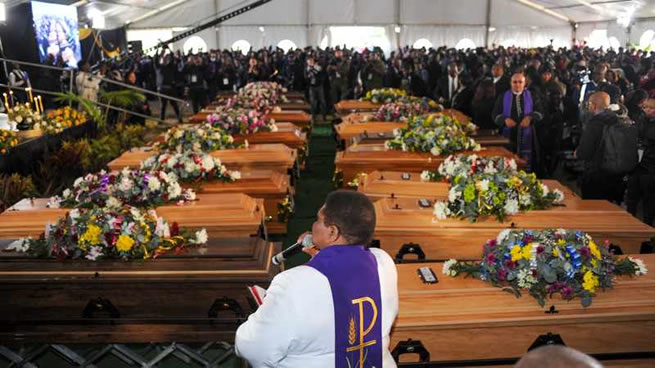 A three-week investigation by News 24 to ascertain why all the deceased were found by forensic and crime experts without cellphones, has revealed that some of them were robbed while drawing their last breaths.


A group of parents who opted to remain anonymous raised concern about missing properties of their deceased children.

Brig Tembinkosi Kinana said police arrested four people believed to have stolen from the deceased in the early hours of June 26 when the tragedy unfolded.

Kinana said the suspects were aged between 16 and 21.

“The suspects are alleged to have been involved in theft of the deceased's belongings from Enyobeni tavern in Scenery Park. The arrests are a sequel to the investigation which started immediately after the reported deaths of 21 children. Detectives followed up on information which prompted the arrest of suspects,” said Kinana.

The first three suspects were arrested on Thursday while the fourth and youngest was arrested at his home on Friday.

“The 16-year-old is in the custody of his parents in terms of the Child Justice Act which stipulates an underage child may not be detained in police cells. The stolen and recovered items included shoes, weaves, clothes and a watch belonging to some of the children who died. Some items have been identified by families while others are yet to be identified. They were recovered in the homes of the suspects,” said Kinana.

The four face charges of theft, possession of suspected stolen property and defeating the ends of justice. Kinana highlighted that the four were not implicated in the deaths. They are expected to appear in the East London magistrate's court on Monday.

Insiders confirmed that police were continuing to view CCTV and cellphone footage of people emptying the pockets of those unconscious or dead.

Khululekile Ncandana, the father of one of the boys who died, said his son Bhongo's shoes were missing.

“We asked for the shoes at the mortuary and we were told he was found without them. The police and the tavern also did not have them," he said.

Some of the parents said they had been called by Scenery Park police to identify valuables recovered from the arrested suspects.

These included weaves and watches but many items, including cellphones, were still missing.

Sources close to the investigation said the missing cellphones had hampered the police investigation, with detectives desperately trying to put together the victims' movements in the last 24 hours before they died, to determine whether they could have ingested any poisonous substance.

On Tuesday, the government revealed that it had found methanol in all the bodies, which could possibly have caused the deaths.

With their cellphones missing, the police are struggling to reconstruct the movements of the victims, to see whether they may have drank at another location or venue prior to the tavern event.

Police insiders claim the investigating team is still searching for more suspects in connection with the thefts.