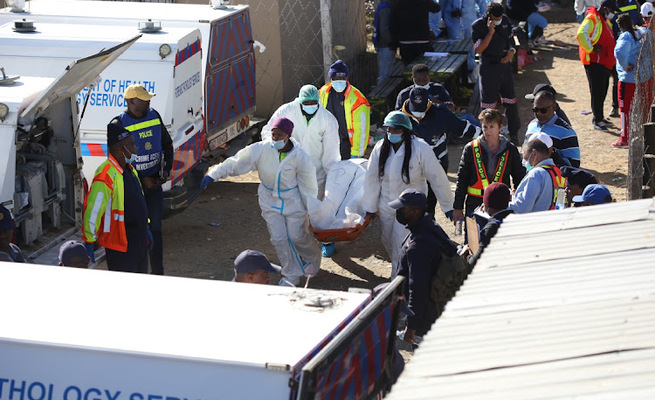 Police have been urged to trace the last movements of the 21 teenagers who died at a tavern in East London last month.

This comes after a toxicology report revealed methanol was found in their blood. Methanol was commonly used by backstreet "manufacturers" to brew illegal alcohol, leading criminologist and forensic expert Paul O'Sullivan said.

O'Sullivan said: "All their respective movements in the 24 hours before their deaths are important and I am sure that the police must be trying to reconstruct their movements, if only from their respective phones. [There are lots] of questions to be answered and the ones that have most of the answers are no longer with us."

During a press conference in East London on Tuesday, Police Minister Bheki Cele and police top brass would not be drawn into speculating on the circumstances leading up to their deaths, only saying the case was still under investigation.

At the Cambridge police station, the Eastern Cape health department's deputy director-general of clinical services, Dr Litha Matiwane, said speculating about where the methanol came from and how the victims might have ingested it could interfere with the investigation.

At this stage, Matiwane added, they could not draw the conclusion the children ingested the methanol directly or as a by-product of something else.

A full and final report is not ready yet as toxicologists continue with their investigation.

Matiwane added while methanol was alcohol, unlike ethanol, it was not a base alcohol in drinking beverages.

"Methanol is a toxic type of alcohol to the body."

When asked for clarity, he said he could not expand on what he said because the case was still under investigation.

O'Sullivan said although methanol was similar to ethanol, it was commonly known as a "toxic alcohol" because it could be deadly.

He added by the time "you realise that you've ingested it, it may be too late to completely reverse the effects, other than with urgent haemodialysis of the blood".

O'Sullivan said methanol was often formed when brewing alcoholic drinks such as beer, wine, and spirits.

The amounts formed in beer and wine are usually extremely low and non-toxic due to the low concentrations.

When spirits were made by a licenced manufacturer, they performed regular tests to ensure methanol (and other harmful ingredients) was not present in the finished product, said O'Sullivan.

He added manufacturers also have sophisticated methods of removing methanol and other by-products during the manufacturing process, saying: "However, some people think they can make homemade spirits, but do not really know what they are doing and don't do it right. This is often the case with backstreet 'manufacturers' of alcohol."

O'Sullivan said if methanol was ingested, it metabolised to formic acid which had a number of industrial uses, like tanning or preserving leather.

He added it was also often used as an anti-bacterial product to ensure a longer shelf-life for certain animal feed.

However in the human body, formic acid, as a by-product of methanol, would quickly bring about severe symptoms that included circulatory problems, liver and kidney damage as well as blindness and death through a combination of the previous symptoms, O'Sullivan added.

O'Sullivan added methanol poisoning could result in abdominal pain, nausea, vomiting and loss of vision if a large enough amount was ingested.

"Cellular hypoxia is also common, resulting in a change to the colour of the skin – 15ml of methanol can be lethal, although it normally takes more. If mixed with ethanol, the metabolic process can be masked," added O'Sullivan.