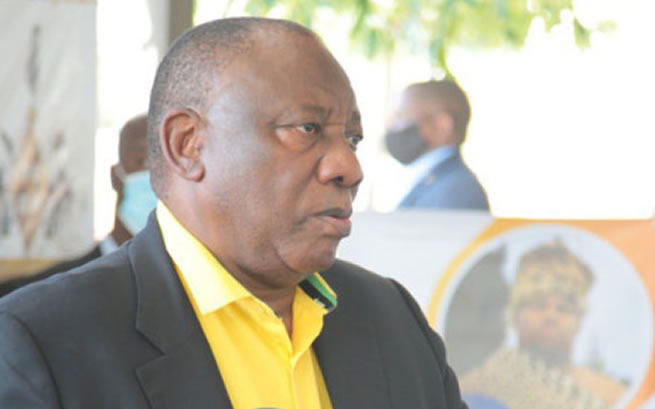 Acting Public Protector Kholeka Gcaleka will subpoena President Cyril Ramaphosa to respond to questions about the alleged cover-up of the burglary at his Limpopo game farm, Phala Phala.

Her office said on Tuesday that he did not respond to the allegations by the extended date of 18 July and instead requested a further extension, which she denied on the same day.

“The PPSA will therefore be invoking its subpoena powers…”


The Public Protector Act says she may direct anyone to submit an affidavit, appear before her to give evidence or provide any document for the purpose of conducting an investigation.

The public protector initially had until July 3 to finalise an investigation into whether Ramaphosa had violated the Executive Members Code of Ethics.

Ramaphosa requested an extension to allow him to answer the questions that had been posed by the now suspended Public Protector Advocate Busi Mkhwebane.

She was controversially suspended a day after confirming an investigation following a complaint against the president from African Transformation Movement (ATM) leader Vuyo Zungula, who was concerned that Ramaphosa may have violated the code by doing paid non-governmental work.

Zungula also wanted the public protector to find out if Ramaphosa had declared his additional income after unconfirmed amounts of US dollars were stolen from his Phala Phala farm.

This after former SA spy boss Arthur Fraser opened a criminal case against Ramaphosa, accusing him of concealing the burglary to prevent the public from knowing he had millions stowed away in furniture at his private property.

The ATM yesterday said it was not convinced that the subpoena route taken by advocate Gcaleka was an effective strategy in holding Ramaphosa accountable.

“The extension by 25 days was already more than the stipulated days alluded to in the statement by advocate Gcaleka. The subpoena does not guarantee that the president will respond in the additional seven days as intimated in the statement by Gcaleka.

“Given the evasive posture of the president, it cannot be ruled out that the president will instruct his lawyers to challenge the subpoena and thus the process could be dragged out for weeks on end,” said Zungula.

He added that Gcaleka should be dealing with recommendations instead of subpoenas.

“Given the lapse of time since the complaint was laid, the ATM is of the view that by now all the affected parties including the SA Revenue Service, Financial Intelligence Centre Agency, South African Reserve Bank, Major-General (Wally) Rhoode, the domestic worker, SAPS Commissioner Fannie Masemola, amongst others, would have been interviewed and their versions put to Mr Ramaphosa.

“Failure by Mr Ramaphosa to respond in the stipulated time should not result in endless and infinite delays. Adv Gcaleka should be in a position to finalise her report and state if the versions are not challenged. By now we should be dealing with recommendations for remedial actions,” Zungula said.

Ramaphosa told delegates at the ANC’s elective conference in Limpopo that the money came from proceeds of animal sales at Phala Phala.

His public utterances were received as confirmation that the president enjoyed an income beyond the rules binding Cabinet members.

Gcaleka granted Ramaphosa an extension until July 18, sparking an outcry from opposition political parties and analysts who accused her of being biased. When Ramaphosa's extension expired, he asked for another one, which Gcaleka denied, and threatened to invoke her subpoena powers.

“We confirm that the president had until July 18 to respond to the allegations letter of June 7 after his previous request to have the initial return date of June 22 extended.

He said when a state institution received correspondence from the public protector, it should submit a written reply or substantive response within 14 days. “The public protector will therefore be invoking its subpoena powers in line with section 7(4) (a) of the Public Protector Act, read with section 5 thereof.

Section 7(4) (a) provides that: “For the purposes of conducting an investigation the public protector may direct any person to submit an affidavit or affirmed declaration or to appear before him or her to give evidence or to provide any document in his or her possession or under his or her control which has a bearing on a matter being investigated, and may examine such a person.”

Section 7(5) state thus: “A direction referred to in subsection (4) (a) shall be by way of a subpoena …” said Segalwe.

Segalwe asked that the Public Protector’s Office be allowed space to deal with the matter.

“The public protector would like to reassure the public that the matter remains ongoing and that other investigative tools and methods are being employed to establish the veracity of the allegations that gave rise to the investigation. No further public comments pertaining the matter will be made in an effort to protect the integrity of the investigation," said Segalwe.

Her legal representative, advocate Dali Mpofu, has grilled witnesses who testified against Mkhwebane.

He has also warned that Ramaphosa would be compelled, if needs be, to explain to the parliamentary committee why he had suspended Mkhwebane.

Ramaphosa has indicated he would not be testifying before the committee as he did not suspend Mkhwebane based on anything wrong that she did, but simply to make way for the parliamentary committee’s proceedings.

Meanwhile, a number of political parties have embarked on multifaceted methods in an attempt to get Ramaphosa to account.

EFF president Julius Malema has claimed that Ramaphosa told his caucus that he wanted to resign because he had no defence for the money stolen at his farm. DA leader John Steenhuisen asked the FBI to probe whether Ramaphosa had not broken any laws when he allegedly received millions of US dollars.

When asked for comment, presidential spokesperson Vincent Magwenya said: “The president’s legal team is in communication with the Public Protector’s office.”