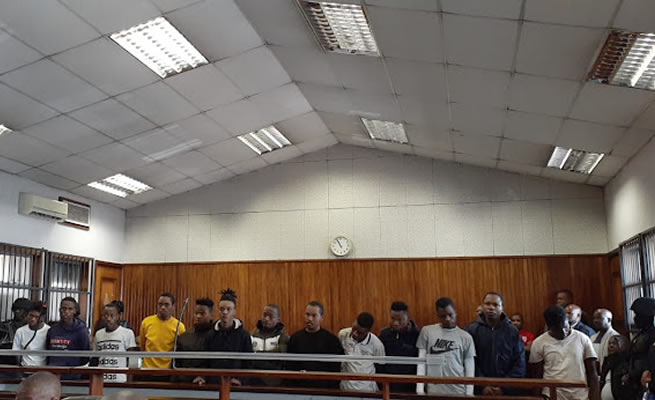 There was shock and anger among some members of the Alexandra community arriving at the local magistrate's court when they saw the 12 men arrested in connection with the deadly shootings that rocked the community.

“I didn't expect that we could be terrorised by local children. I expected foreigners to be behind this. Not SA children,” Lizzy Sithole, community leader in Alexandra said after the men's brief appearance .

Eight men were arrested, but later four more were caught.

When the accused appeared in the Alexandra Magistrate's Court on Monday, the matter was postponed for verification of address, profiling and bail.

They were all remanded in custody.

Sithole said she was tired of the "failed justice system that seemed to favour perpetrators, instead of victims".

“We are disappointed that it's young people who murdered people. They are kids, they are still young. They should be in school. Their peers are in university. They should be doing the same, not killing people,” Sithole said.

“These children have blood on their hands. We honestly expected to find older people, not such young children to be behind such big crimes.”

“We've been living like prisoners in our own homes. We don't have the freedom to walk on the streets because of these gangs that have been terrorising us.”

Speaking on behalf of the community, she said she hoped the accused would not be granted bail.

During their appearance, security was heightened in court as community members staged a protest outside court.

Mjonondwane said the accused were charged with two counts of murder, four counts of attempted murder, robbery with aggravating circumstances, possession of stolen property as well as possession of unlicensed firearms and ammunition.

She added: "This was a brief appearance, as you would recall this was their first appearance. Therefore, they need to be legally represented. Their matter was postponed to 25 July for them to get legal representation."

Mjonondwane said there was no information on whether or not the accused would seek bail.

She said the State will oppose bail for a variety of reasons, including the fact that the charges faced were of a serious nature.