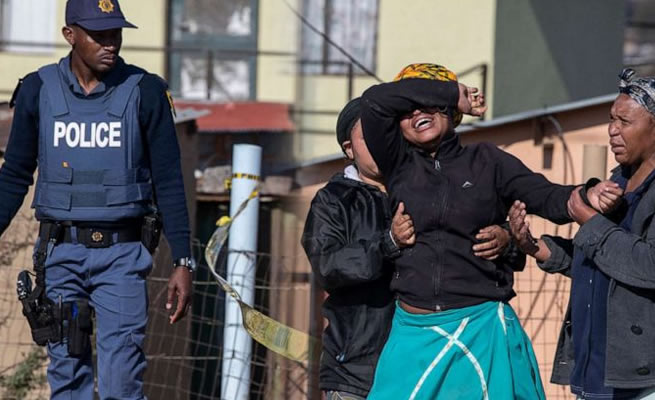 The top brass of the SA Police Service has disputed claims that the recent surge in mass murders and shooting sprees in the country are coordinated attacks.

"Up to so far, in terms of our investigations, we have not found any relations to all the incidents and haven’t found them to be coordinated," national police commissioner General Fannie Masemola said following an imbizo in Alexandra, Johannesburg, on Sunday.

"There are more individual incidents, and in most cases, we are on track to get the suspects. In areas where we have to make an arrest, we already know who we are looking for, and it is not about that there was coordination from one incident to the other."


Masemola said the police had also beefed up their operations and resources countrywide to tackle crime.

"There are areas which are hotspots where we know crime is happening, or while people are enjoying themselves in the liquor outlets. These things are happening; it is not coordinated."

Masemola and Mawela were speaking after another bloody weekend resulting in the deaths of several people in the country.

In the latest incidents, nearly 20 people were shot dead in mass shootings in South Africa this past weekend.

Western Cape police spokesperson Colonel Andre Traut said gunmen had shot three men – aged 34, 36, and 50 – on the corners of Nyebelele and Ntango streets in Site C around 20:30. Two other men in their 30s were shot and killed in Tutu Avenue, Makhaza, in Harare.

On Saturday night, in the Tembelihle informal settlement, Lenasia, Gauteng police said a group of people had been sitting around a fire playing dice when they were shot at. Four died on the scene, and two others were taken to hospital.

'WE ARE GOING TO BE HARSH WITH CRIMINALS'

In a separate incident in the same area, a 36-year-old man who appeared to have been robbed of his belongings, including a cellphone and bicycle, was found shot dead.

Hardly 24 hours before the murders in Cape Town and Lenasia, Sesi Smit, her 17-year-old son Rhudi Binta, and her five female employees were killed at her Lismore farm in Kestell on Friday.

Free State police recovered her stolen Ford Ranger bakkie on the road between Kestell and Bethlehem. Spokesperson Brigadier Motantsi Makhele said some bodies had visible gunshot wounds, while others had stab wounds.

During an imbizo in Alexandra on Sunday afternoon, Mawela also announced that an eighth suspect had been arrested in connection with the shooting spree in Alexandra over the past week.

It is alleged that the accused went on a robbing and shooting spree in the area. Arresting officers found them with stolen cellphones, ammunition, and firearms.

When given a chance to address Minister Bheki Cele and the two commissioners, Alexandra resident Kopano Motsumi blamed the lack of police visibility and load shedding for the crime in Alexandra.

"City Power and Eskom management, please consider Alexandra, it is a hotspot for crime. If you are going to switch off the lights, do it during the day. We don’t have enough light in Alexandra. That’s why criminals are taking advantage of that situation.

Motsumi warned that residents of Alexandra would begin to take the law into their own hands.

'YOU HAVE DISTANCED YOURSELF FROM THE PEOPLE'

"We are going to take the law into our own hands and we are going to be harsh with criminals. And when we are harsh, you are going to come back to target and arrest us. In Alexandra, we are suffering. Criminals are everyone.

"You [police] guys are fighting internally, and us on the ground are suffering. You [Police Minister Bheki Cele] have distanced yourself from the people," he said.

Cele promised the residents of Alexandra that a "special team" would be set up to fast-track cold cases in the area.

"There are outstanding cases. The commissioners, both provincial and national, will send a special team to be able to crack all the crimes here and arrest all the criminals. I did see the figures and the statistics; they are not very good. There are a lot of withdrawals… there are a lot of cases being investigated for a long time.

"It is important that if you commit a crime, you get arrested quickly so that people can realise that they have no business to commit crime. The community at large must also be assured that police respond," Cele said.

He added that police would also act decisively when dealing with suspected drug dealers in the Johannesburg suburb.

He said they would meet again with community leaders to discuss long-term plans to tackle crime.

"We have worked very closely with the community after this crime that has been committed here. We don’t want that moment to die."