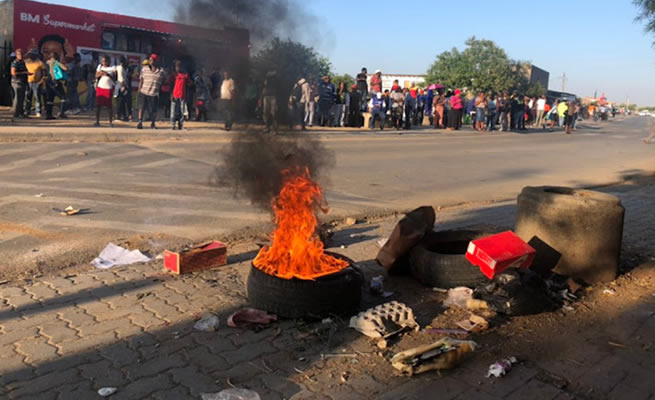 A woman suspected of being an Operation Dudula member targeting residents in Alexandra came under attack by angry community members on Tuesday.

She was saved from an attempted necklacing, and then arrested.

Police spokesperson Col Dimakatso Sello said the 40-year-old woman was suspected of being a member of the Dudula movement which has illegally evicted people from their houses in the suburb north of Johannesburg.

“The woman, who had injuries, was taken to hospital under police guard and was detained as per a case of malicious damage to property and public violence registered in May at Alexandra police station,” said Sello.

No-one has been arrested yet in connection with the incident.

A video purported to show the woman pleading for her life has been shared on social media. In the 13-second clip, she is heard saying “I am no longer a Dudula member. I am not a Dudula member.” She has a head wound and two tyres — unlit — are around her waist.

Alexandra CPF chairperson Chris Mabunda said some residents complained that they had been attacked by her and other Dudula members.

“They wanted to burn the lady yesterday [Tuesday] in Tsutsumani who is part of the Dudula movement,” he said.

It is believed that while some of the group's members were arrested the previous week, she allegedly joined a group continuing to evict people from their houses. When the residents heard about it, they allegedly started looking for her.

“They assaulted women who are from SA and some of them sustained injuries. They have been doing it [evictions] and are continuing to do so. In some places they need money [ask for a bribe]. I can’t say why they are doing it because they are the only ones who know,” said Mabunda.

Previously the ward councillor in the area, Tefo Raphadu, told TimesLIVE the movement was gradually turning into a vigilante group that is uncontrollable and fighting the community it claims to represent.