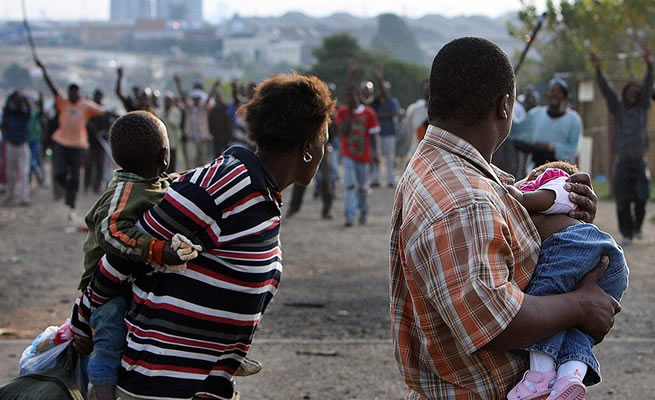 When Moira left Zimbabwe two years ago to work in South Africa, she hoped to save enough to fund her business management studies then start a small business to help her raise her 5-year-old daughter, who was just three at the time.

But a month after she started her new job as a domestic worker in Cape Town, South Africa went into lockdown.

“My husband and I both lost our jobs and for six months we did not have any form of income. We depended on relatives to give us food,” she said.

Some days they did not eat, and when they had no rent money in December last year their landlord evicted them and threw their belongings into the street.

“The police wouldn’t even bother to rescue us because they could see we were foreigners,” said Moira. “We couldn’t even confront them as we don’t have legal documents and we could be arrested if they found out.”

Moira, who asked that her surname be withheld because of her illegal status, said she understands why so many foreigners in SA are driven to suicide.

Emergency medicine researchers from Wits University say even though foreigners form only 7% of the population, they account for 22% of patients who tried to kill themselves with poison.

Writing in the SA Medical Journal, the researchers also report that of almost 300 patients treated for intentional self-poisoning at Charlotte Maxeke Johannesburg Academic Hospital in 2016 and 2017, 63% were women younger than 30.

Pesticides were the most common poisons and accounted for the majority of deaths and intensive care admissions.

Explaining why women are at higher risk of self-poisoning, lead researcher Prof Abdullah Laher — a specialist emergency physician and intensivist at Charlotte Maxeke — said men tend to use more violent methods of self-harm, such as hanging or shooting.

“While women are more likely to experience suicidal thoughts or attempt suicide, men are much more likely to complete suicide. This is known as the gender paradox of suicide,” he said.

Younger people were more at risk of suicide due to unemployment, identity crises, mental immaturity and lack of capacity to deal with stressful life events, said Laher.

“Single people tend to feel less supported and lonely compared to married people. Impulsive behaviour is also more common in this age group, which is a critical time for mental and emotional development and establishment of life goals.”

Moira said even though she doesn’t consider herself suicidal, “I’m constantly battling with negative thoughts due to my life struggles”.

Fear of deportation, lack of job security, xenophobic attacks and the recent attempt to launch the anti-immigrant movement Operation Dudula in Cape Town are giving her sleepless nights, she said.

“Every day I pray that Operation Dudula doesn’t come to Cape Town. I worry about a lot of things … not having enough money to pay rent and whether we will have food, as my husband is still not working. My employer pays me less than R200 a day and says I should be grateful to have a job after Covid.

“The negative thoughts often come as I feel like a burden even to our relatives who always support us financially. I always have to work on my thoughts and remain positive for my daughter’s sake. I often wonder who will look after her if I’m no longer alive.

“Having a responsibility to raise a child helps me not to consider suicide as an option even when such a thought comes.”