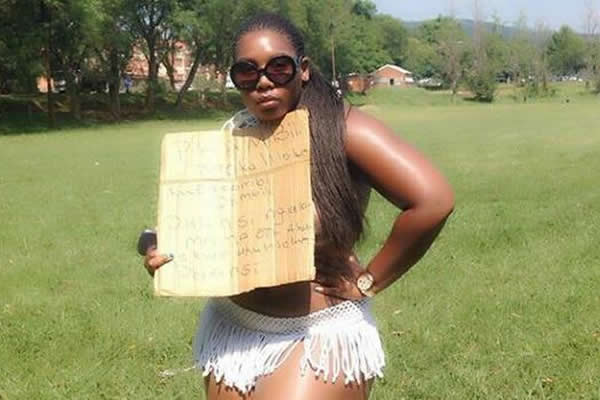 Zuma’s bride-to-be and her brother don’t seem to know why their father was ranting to Isolezwe about the former president’s former promises.

According to her brother Shayimamba Conco, Nonkanyiso Conco is concerned her father is causing tension between her family and former president Jacob Zuma’s.

Her father, Fartescu Conco, ranted to Zulu newspaper Isolezwe that Zuma still owed him money for lobolo for his daughter, apparently promised to him by the then president in a phone call.

In April it was reported that Zuma had been in a relationship with the 24-year-old Conco for five years, after first meeting her at the Zulu reed dance at Nongoma in 2013 when she was 19. It was also reported that she was still a virgin when she first met Zuma, and Nonkanyiso's father even knows that his daughter lost her virginity to Zuma, who has so far impregnated 15 women 24 times.

Nonkanyiso bore Zuma a child on his 76th birthday this year. It was first reported that Zuma paid lobolo for Conco in 2016 and the relationship continued to be secret until The Citizen first reported on it in April.

Conco’s father, however, told Isolezwe that Zuma had not kept to his word about the lobolo. He said he felt disrespected and angry. Fartescu said he only learnt about his daughter giving birth when he saw it in the media.

However, Conco’s brother Shayimamba told The Sowetan that wasn’t true and Zuma had paid the dowry “timeously and in accordance with our practices”.

He claimed the family remained happy about the union, although the Isolezwe report suggested that Conco, who was asked for comment, was no longer taking her brother’s calls. On Tuesday, the same paper reported, however, that he was speaking on her behalf when he said she was concerned about the strain this was putting on the relationship between the families.

Her brother said he was struggling to get hold of their father, and he was planning to travel to Pietermaritzburg to confront him about “what this is all about”.

Conco’s uncle Wele Dolomba had told the Sunday Times in April they were also impressed that Zuma only impregnated Conco after first paying lobolo.

Zuma spokesperson Ray Zuma said in April that the media should focus more on current president Cyril Ramaphosa and he would not divulge how much the lobolo had actually cost. He repeated his calls for privacy on Monday.