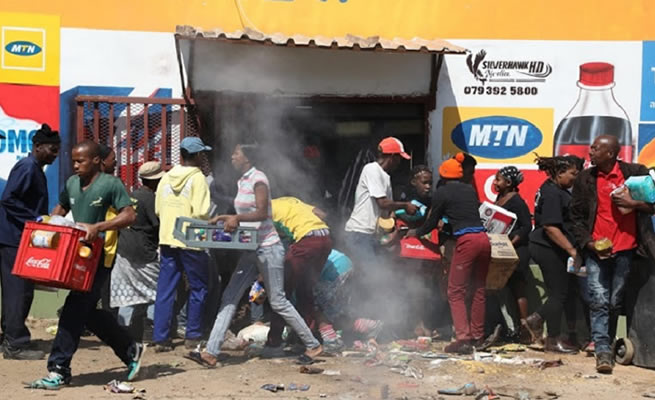 Foreign nationals in Durban are living in fear after a shop owner's property was allegedly looted despite police and eThekwini Metro halting the Operation Dudula campaign.

Daniel Dunia, a leader in the Africa Solidarity Network – a lobby group that represents African foreign nationals who came to look for employment in South Africa – described the operation as xenophobic and an act of criminality that drew little condemnation from government.

He said they were afraid for their lives now that Nhlanhla "Lux" Dlamini, the leader of Operation Dudula, was granted bail.

"It is alleged that a group of vagrants entered two tuck shops in KwaDabeka yesterday and stole some items. The complainants did not desire the opening of cases."

Dunia told News24 that foreign nationals were "living in fear".

"The fact that they planned to launch it in Durban and remove foreigners and the City denied them access to march, but they still went to KwaDabeka and looted shops owned by an Ethiopian is scary."

He said they were also unhappy at the fact that Dlamini was granted bail. He said this would raise the risk factor for foreign nationals.

Dlamini is facing charges of housebreaking, theft and malicious damage to property. He was granted bail of R1 500.

Operation Dudula, which started in Johannesburg, forcibly closed shops that belonged to foreign nationals in townships and town centres.

Dlamini rose to prominence during the July unrest when he protected Maponya Mall in Soweto from looters.

Dunia said they were afraid that Dlamini's release would embolden locals to attack foreign nationals.

He said: "We are living in fear, the fact that he is given bail is going to intensify the campaign. We live in fear, we don't have much protection. Anything can happen from now, we are gravely concerned."

He said they engaged different spheres of government, including eThekwini Metro and the KZN government. He said while neither officially supported Operation Dudula, there still needed to be proper condemnation from leaders.

"To the people, is not clear if the government is supporting Operation Dudula."

CRIME DOES NOT HAVE A NATIONALITY

Dunia said the campaign was nothing less than an act of criminality.

"Crime does not have a nationality. A criminal is a criminal whether he is from SA or anywhere else. People associating crime with a nationality is wrong. We cannot generalise and say something so inflammatory. The law must deal with criminals as such. The law is the law."

He said the majority of foreign nationals were in the country legally.

"Most are refugees and asylum seekers. Because SA does not have refugee camps, these people have to be in the community and work for a living. They have to operate their businesses.

"There is no camp for refugees. The only way to survive is to open a business and work, unless there is a camp and government can provide for them. But refugees need to work and have to survive. Linking them to criminality is wrong and untrue." – Work in South Africa