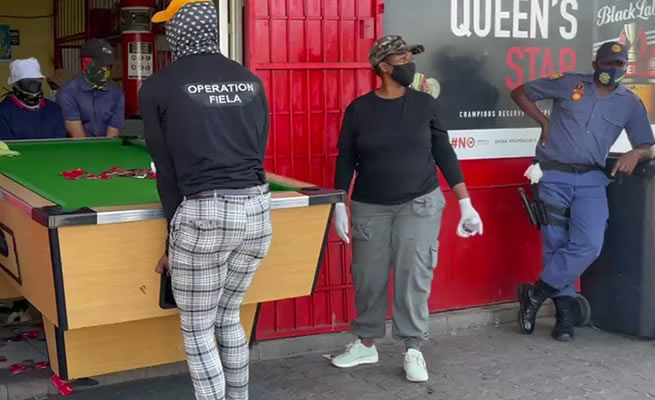 Kimberley residents have chased away two foreign shop owners out of the city, after searching their shops and allegedly finding drugs and a large sum of cash stashed in a safe.

The pair were put on a taxi to Johannesburg and ordered never to return to the city again.

Members of a newly formed Operation Fiela raided shops around the city in search of drugs and illegal immigrants who came to seek employment in South Africa.

The raids were conducted following a tip-off that some of the food outlets around town are being used as a front for drug peddling. Two foreign shop owners had to close shop, their goods were confiscated and doors locked. They were instructed to never return to the city.

Leader of Operation Fiela, Thabiso Louw explains, “We are here because of this guy is fronting with this restaurant. So we found large sums of money and the papers have expired and that is why we are removing him. And then the other three shops we managed to find drugs and we also found dagga, tik and a large sum of money also. So now we told him to just pack his money, we are removing him from this place.”

One of the shop owners, Henry Jideofor whose equipment, food, and belongings were taken out of the shop for allegedly selling drugs, denied that he is using his shop as a front.

The shop owners, who were found with drugs, were sent packing by the residents. The South African Police Service (SAPS) members were there in numbers monitoring the situation, as residents took the law into their own hands.

Kimberley residents say the scourge of drug abuse is wreaking havoc in their town: