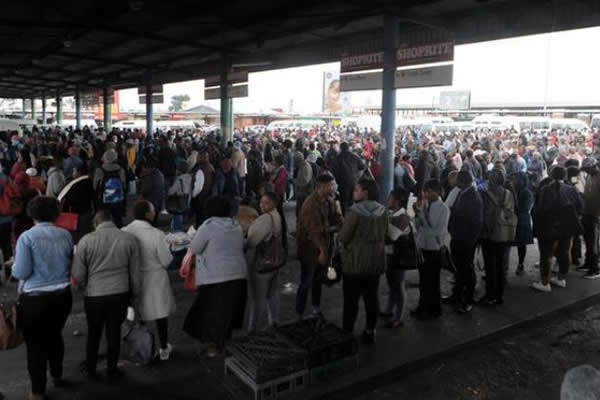 The third round of wage negotiations in the SA Road Passenger Bargaining Council (Sarpbac) failed on Monday as unions demanded a double digit wage increases while employers made a final 3% offer.

A potentially crippling strike in the bus sector is planned for the busy Easter weekend as wage increase negotiations between those who work in South Africa and employer associations collapsed.

The third round of wage negotiations in the SA Road Passenger Bargaining Council (Sarpbac) failed on Monday as unions demanded a double digit wage increases while employers made a final 3% offer.

Unions for workers in South Africa on Thursday made written and oral submissions in the council on picket rules which will be binding as they observe a mandatory cooling off period which will end on April 13, just two days before the Easter weekend after which the strike can begin.

SA Transport and Allied Workers Union (Satawu) passenger bus national coordinator Solomon Mahlangu said employers have failed to come to the party in the negotiations, leaving workers with no other option.

Mahlangu said the offer from employers was an insult to workers who have for the past two years accepted increases which were below the inflation rate and did not factor in benefits and allowances.

“So we already have the certificate of non-resolution which permits us to strike. The adoption of picketing rules are just logistics to ensure that the strike is manageable and peaceful,” Mahlangu said.

He said the workers' negotiators were still available if the employers are willing to resolve the dispute but as things stand “the strike is inevitable”.

“Within this 30 days cooling off, we do express our availability to employers… this strike comes as our only tool to force the employers to concede to our reasonable demands,” Mahlangu said.

The strike look set to affect 14,000 workers, mainly bus drivers, working for subsidised and non-subsidised bus services, including Putco which operates in Gauteng, Limpopo and Mpumalanga.

Unions initially demanded a 15% salary increase, that the minimum wage in the sector be R12,000 per month and the introduction of a compulsory industry healthcare scheme.

Employers pushed for a 2% three-year increase agreement which was rejected by unions.

Labour then revised its demands to 11% and minimum wages to R10,000 a month while employers moved their position to 2.5% and later placed a final position of 3% which led to negotiations collapsing this week.

“For example, Numsa has moved from 15% to 10%… one of the sticking point is the issue of medical aid. Currently, some companies offer medical aid but the rates are so unaffordable that members choose to go without cover,” Hlubi-Majola said.

She said a full-blown strike is what the employers' “refusal to make meaningful compromises” has pushed unions to a “full-blown” strike before the Easter weekend.

Terry Murugan, president of South African Bus Employers Association (Sabea) which is one of the two employer bodies, said: “It would be premature for me to speak [about the strike] because we are committed to the cause of getting it resolved. Let us follow the process and then we will be able to give you a comment later”

He, however, indicated that the Easter weekend is important for the members of the organisation.

“The Easter weekend is important [to our operations] but not as important as it was many years ago because of the Covid-19 situation,” Murugan said, adding that they were not yet certain if there would be mass Easter gatherings.

“It is a bit of catch 22 for us. We don’t know whether gatherings will be allowed, for example in Mount Moriah…We are just waiting to see what is going to happen,” Murugan said.

Wallet Khumalo, chairperson of the Greater Soweto Commuter Forum, said: “The bus companies do not bother to inform us about the possibility of a strike. Come month end commuters refill their bus tags and tickets.”

He said commuters are always the worst hit as they only know when the strike is about to start that they need to make alternative means while they've spent their money on monthly tickets.

“By that time there is no refund. When they go to their offices, no one is at work,” said Khumalo.

Prasa spokesperson Andiswa Makanda couldn’t respond about their subsidiary Autopax’s City to City and Translux contingency plans to limit the impact of the strike. Makanda said she will be able to respond on Friday.